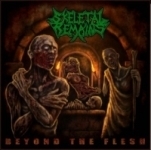 When I put on this record for the first time I actually had to look twice since though being recorded in this day and age it takes us on a straight trip back to 1991 when American Death Metal was inseparably connected to the mighty Morrisound studio where Scott Burns and Tom Morris forged a trademark sound that was crushingly heavy yet transparent and was met with contempt by the fans of a more punkish, raw approach but hailed by folks like me who always had a soft spot for technical brutality deeply rooted especially in US Thrash Metal. Still, to the very day I think the Morrisound brand of Death Metal is my absolute favorite form of extreme music and I have hardly listened to anything else as often as the classic records recorded there. So, gimme “Ten Commandments”, “Cause Of Death”, “Deicide”, “Death Shall Rise”, “Spiritual Healing”, “Blessed Are The Sick”, “The Bleeding”, “Considered Dead” anytime and you will see a damn happy guy! “Considered Dead” by GORGUTS is also a great way to start talking about Californian youngsters SKELETAL REMAINS who formed in 2011, did a demo last year and now unleash the debut album “Beyond The Flesh” which is a shameless thus fantastic case of Morrisound worshipping. No one does this style anymore and at least I f**kin’ miss it, so I ignore the absence of originality here and celebrate it for the sweet memories and sheer pleasure it offers. SKELETAL REMAINS can be well described by their choice of cover songs: the LP version of the album comes along with a cover of GORGUTS ‘Disincarnated’ and the demo included the PESTILENCE cover ‘Chronic Infection’. Vocalist Chris Monroy sounds 1:1 like PESTILENCE era Van Drunen and the band’s riffs consist of a perfect blend of faster thrashing elements, the stomping mid-tempo groove you’ll know from DEICIDE, excellent melodic and reverberating leads and diverse song structures requesting you to actually spend some time with this record. Also, DEATH ‘88 / ’90 are very much present here, just check the opening riff of ‘Traumatic Existence’ which is pretty close to the verse riff in ‘Forgotten Past’, I think. In terms of song-writing SKELETAL REMAINS could maybe add a few more enthralling hooks since it takes a while until favourite tunes develop but it also adds to the album’s longevity which is a good thing overall. Ending several tunes with fading out or stopping right after solos (‘Homicidal Pulchritude’, ‘Anthropophagy’) bothered me a bit – why not keep on riffing or repeating the chorus? Would have been less abrupt and smarter in my opinion, but that’s minimal complaints compared to the incredible amount of joy songs like ‘Sub-Zero Termination’, the diverse opener ‘Extirpated Vitality’ with its tension-building instrumental foreplay and storming drive, the hellish groovy killer ‘Desolate Isolation’ or fast ripper ‘Reconstructive Surgery’ ultimately bring. Bottom line is: zero originality loses the fight against 666 tons of pure Death Metal delight and I can only wish for European live shows where I can go nuts to these tunes! Get this, folks! Listen to an album sampler here, like SKELETAL REMAINS here and buy it here.