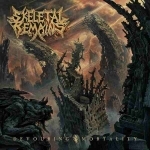 Sometimes I just want to hear pure Death Metal. Sometimes I just want to weed out any progressive elements or long, drawn out, meandering songs. Sometimes I simply want an album to pack a punch that’ll leave me reeling for the rest of the day. And California’s SKELETAL REMAINS fits the bill perfectly. Originally calling themselves ANTHROPOPHAGY, a word that’s damn difficult to spit out, they chose a much more descriptive and pronounceable name. early in their career. It sticks with you, much like their third album "Devouring Mortality". Chris Monroy (vocals, guitars), Adrian Obregon (guitars), Adrius Marquez (bass) and Johnny Vales (drums) are an amalgamation of talent that fit cohesively together. The chugging guitars of the opening track ‘Ripperology’ provide a straightforward introduction to the album as Mr Monroy gurgles and rasps his way through a classic-style of Death Metal we’ve come to expect from SKELETAL REMAINS. Two and a half minutes in, and a mid-tempo breakdown will have moshers stomping and shoving without hesitation. ‘Seismic Abyss’ bludgeons into us face-first with swirling, galloping guitars and blood-pounding drums. The vocals contain the energy and remind me a little of ASPHYX’s Martin van Drunen, which is a good thing. ‘Catastrophic Retribution’ has that filthy Death Metal sound that churns and grinds its way into our souls until it wrenches our heart from beneath our ribcage and sucks the blood dry. ‘Devouring Mortality’, ‘Grotesque Creation’ and ‘Parasitic Horrors’ are all aggressive tracks that’ll keep your fists pumping and head banging no matter where you are, while tracks such as ‘Torture Labyrinth’ and ‘Lifeless Manifestation’ subtly slow it down to not quite running, but maybe slithering, giving a little variety to the album yet keeping it somewhat consistent. ‘Internal Detestation’ is a powerhouse of a track before leading into ‘Hung, Drawn and Quartered’, a CANCER cover, to end the album satisfyingly (bonus track on the Century Media digipak edition – Frank). We can easily count on these masters of Death Metal to deliver solid, hard-hitting albums without all the extra gimmicks or experimentation other bands tend to throw in without much thought. As long as SKELETAL REMAINS keep kicking us in the teeth, we’ll keep taking it. For more information, check out www.facebook.com/skeletalremainsdeathmetal, www.centurymedia.com