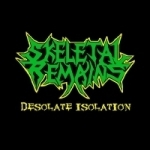 If someone would have told me that this demo is an old and forgotten PESTILENCE recording I absolutely would have believed it. Especially the vocalist sounds so much like Martin van Drunen, that it’s really creepy. But it is not Martin and it is not an old recording. SKELETAL REMAINS is a young band from the USA and they recorded those four tracks in 2011. The result is superb Death Metal the way it was played in the early 90s. I’m not talking about some trend following kids who just discovered that old school Death Metal is cool. No, this is the real shit, this band truly understands what was going on in those glory days and what made it the golden age of Death Metal. The arrangements, the sound, the vocals, simply just everything on "Desolate Isolation" sound like it was created in 1990. And every single note played on this demo is an evidence of the passion, dedication, talent and attitude of this band. Obviously Dutch veterans PESTILENCE are the main influence but SKELETAL REMAINS also remind me now and then of early GORGUTS, which isn’t that bad either. The three own compositions (the fourth song is a PESTILENCE cover) are created in the vein of the aforementioned masters without stealing and without being a copycat. Like those two bands SKELETAL REMAINS also know how to write excellent and brutal songs and how to handle the instrument which adds a technical approach to the songs. Well, to sum it up: I highly recommend this demo and SKELETAL REMAINS is definitely a band you should keep an eye on. So get this limited tape before it’s gone and let’s wait for their full-length album. www.facebook.com/pages/Skeletal-Remains/199922500049271, www.fda-records.com