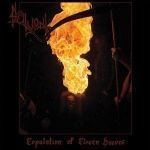 Seattle has been known through the time for being the nest of different kinds of popular music such as Grunge and Indie Post-Rock, and that background commonly is linked to politically correct behaviours, but from the abyss with hate and despite being banned on their own lands, SLUTVOMIT puked their second strike reaffirming their oath. In order to dismember this ode to apology, “Copulation Of Cloven Hooves” offers to the devil 9 sharpened cuts of Black / Death / Thrash in the vein of NIFELHEIM, SARCOFAGO, GOSPEL OF THE HORNS, DESTRÖYER 666, NOCTURNAL and so on… But you can say, what’s new on this? It doesn’t matter here! Attitude prevails in this case with a FOAD written on their forehead and thus expelling real Metal without compromises. The first thing to notice, in comparison to their 2013 album “Swarming Darkness”, is the actual darkened general sound with scooped but still sharpened rhythm guitars instead of the noisy treble attack of the previous one, also a boost on the drumming presence due to the explosive arm style of E. Jelsing, rather than the classical wrist technique for blast beats, pure strength. The fires start with ‘Command For Triumph / Genocide Lust’, a bestial instrumental attached to a metalstorm which introduces one of the highlights of the album, the remorseless guitar solo abuse on almost all the tracks, entailing an evil and daemonic attack ambience. Then ‘Endless Graves’ opens the gate with an early MORBID ANGEL resource, but then it turns for the well-known maelstrom these demons have been cultivating through the years, double voices and tremolo attack through intense speed. Then, after the typhoon a brief moment of calm with a BATHORY like solid mid-tempo, develops slowly at ‘Copulation Of Cloven Hooves’, setting the main tempo for what is about to come with ‘Baphomet’s Call’ and ‘Evil Commands You’, where the SLAYER and POSSESSED glimpses on the strings reaffirm the point of view of SLUTVOMIT’s demons. Reaching the end ‘Sepulchral Dawn’ clearly becomes the highlight of the record being the most ultraviolent song here, approaching to what BESTIAL WARLUST or SADISTIK EXEKUTION did decades ago, but with their own genuine playing style. The artwork resembles NIFELHEIM’s releases, bursting flames, scythes and a simple and raw layout with scarce information. No need of pompous graphics at all… At the end of the day, “Copulation Of Cloven Hooves” is the living fact that passion is still alive and an example of how to bring elements and influence from seminal bands from each scene and take it to another level of aggression and hate, features that are lacking today due to overexposure, pretentious works and politically correct standards. Fuck you all!!! www.facebook.com/slutvomit-123318014412787, www.invictusproductions.net