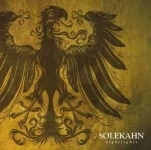 "Nightlights", the 2nd studio album of French Avantgarde Dark / Death Metal band SOLEKAHN, has been 6 long years in the making (in between the years 2006-2012). The album’s big brother, titled "The Great Diviner", was released in 2004 (on Sacral Productions), already set some stars for the right position for this French act, according to a bunch of flattering reviews anyway that were written about "The Great Diviner". Well, I have never become familiar with the band’s debut, and after spinning "Nightlights" a few times back and forth curiously enough, I guess I haven’t missed that much after all. "Nightlights" is simply such a mishmash of an album with too many oddities being squeezed into just one record. It doesn’t have any coherent feel to it at all – and all it basically does for me, is to get me nervous probably because I simply cannot get into this stuff – just no matter how hard I tried. Or maybe it has something to do about being open-minded and patient with such a hard-hitting shit like this? Uhm, I really don’t know… Hence I don’t wanna criticize this French act too much because this type of stuff surely isn’t targeted for such an old fuck that I am. What I am going to do next, however, is to clean my ears off with some easily digested AUTOPSY stuff. I am off now… adios. In case you want to learn and know perhaps a bit more about SOLEKAHN, then you may want to go to www.facebook.com/solekahn.band, label: www.mightymusic.dk