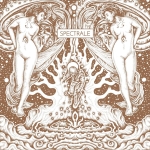 SPECTRALE is Jeff Grimal’s side-project, guitar and voice of the French Post Black Metal act THE GREAT OLD ONES. To set it straight right from the start: the music is very distant from any Metal / Rock subgenre. Acoustic Folk could be a good term to describe this album, but its manifest influences range from minimalist composers like PHILIP GLASS, STEVE REICH and MOONDOG to progressive giants like PINK FLOYD, MAGMA and KING CRIMSON, including also bands like ULVER, SUNN O))) and BRIAN ENO. Ok, it’s an incredible mix of different music that help to let you know how a musician like Grimal is open-minded and not completely connected to the Heavy Metal standards. The nine tracks of the symbolically titled ‘▲’ are an incessant trip made by mantras played with acoustic guitars, with supplementary cello, keyboards, drums and also some kind of esoteric vocals. The main aim of the songwriting is to be hypnotic and meditative, a song like ‘Magellan’ is one of best example in this sense, but my favorite one is the title-track, a spiral of dark, psychedelic and charming melodies supported by a Prog Rock drumming. The whole album is a personal experience anyway, too difficult to criticize or to exalt. Die hard fans of THE GREAT OLD ONES will surely know SPECTRALE and they will probably love this album. Truth be told, I don’t feel to say that ‘▲’ is a musical masterpiece. It sounds a bit generic to me, but it’s nonetheless enjoyable. You don’t need any other word, just check it out. More about SPECTRALE at www.facebook.com/spectrale.bx, label contact: www.facebook.com/ladloproductions