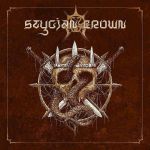 The American STYGIAN CROWN, which consists of members of MORGION, GRAVEHILL and MORBID ECLIPSE, comes here with their eponymous debut: an amalgamation of Doom and Death. They gave their style the term “Candlethrower”. A contraction of CANDLEMASS Doom and BOLT THROWER’s Death Metal. It sounded interesting, but must admit that, initially I had no expectations. But later was really overwhelmed, when I heard the debut album the first time. The way in which both genres unite here is solid and jaw dropping. The album showcases a band that’s hungry and their epic Doom Metal is just putting a spell on you, as everybody adds his / her piece with a focus on the total into the songwriting process for the seven songs (and the intro). CANDLEMASS and BOLT THROWER have been a major influence to music of so many acts in one way or another, in the past 30 years. They have their very distinctive traits, but the differences here are the approach of the singer and the speed of the tempo. Here, without doubt, Melissa is more than up to the task and is enthroned with her deep, powerful voice over the mostly overlong compositions and puts a clear stamp on them, which gives STYGIAN CROWN its own character from the very beginning. And I cannot help but imagine her in a cloak, as her vocal style is so close to Messiah Marcolin. You only hear ‘Up From The Depths’, when the bewitched Samarithan is led to the Gallows End – a real pleasure and spine chilling to say the least. As the band does not consist of freshlings, so it is also not surprising that they master the songwriting craft perfectly. Despite the length of the songs, the movements and transitions are effortless. The production is also successful, with a fantastic guitar sound and powerful drums, as well as an impressive clarity, which nevertheless does not come across as sterile, but warm. In addition to supporting epics such as the opener ‘Devour The Dead’, ‘Flametongue’ was remarkable, which is well known from the demo “Through Divine Rite”, and whose faster parts are strongly reminiscent of ANGEL WITCH, especially in terms of the vocals. The album lyrics center around folklore from different cultures – Egyptian, Greek, Norse, but the primary topic is that monster within us, where we seem to be the catalyst for all our own issues and it felt like Melissa shines a light on our greatest misgivings which we don’t seem to grasp yet. Altogether, STYGIAN CROWN‘s self-titled debut is a very rich and mystical album, and will remind that – Doom Metal is still fascinating; from the first BLACK SABBATH album to these new releases of unique and overwhelming magic, which needs many listenings to experience as a whole. With an expressive cover art by Misanthropic Art, hear this result of the cosmic union, which was released in association with prestigious Cruz Del Sur Records. Explore more about the band at www.facebook.com/stygiancrown and visit their label page at www.facebook.com/cruzdelsurmusic.