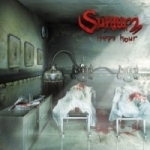 The next official toe-tag in line for these Belgian masters of Death, their third album of blood soaked brutality! I tell you it is so refreshing to hear a band that has all its pistons firing at the same time! Incredible! As I used to think that only the gods of old who were releasing records on Roadrunner, Century Media and Nuclear Blast in the day were capable of delivering album after album of memorable Death Metal. Those deities are not alone, not anymore! SUHRIM honestly re-create that esthetic that has been so sadly lacking within this genre spectrum for so many years and refuse to submit to anything less. A fact, that is more than appreciated, to this Death Metal fan and avid album reviewer. Each CD of SUHRIM take yet another step forward in terms of musical evolution output without compromising any of the brutal sickness and gore infested compost that culminate to form the fetid, morbidious creations that are spat forth in vomited rage! Moving slightly away from their Swedish inspired foundation to a more English standard. Think CARCASS and some early NAPALM DEATH mixed in and I’d wager you’ll also get caught up in the swift terror that SUHRIM are assuredly known for throughout the EU. One aspect that is also not lost was the brutal recorded sound that the band received as a remix on their previous album “The Cunt Collector”. That sick sound was as closely adhered to on this album as a recording engineer could get. As SUHRIM opted oddly enough not to run with CCR Studios as they had for that notable remix, yet instead went to Studio Hertz / Bialystok, Poland. A risky move to be sure, yet actually worked out very well in the end. Favored songs ‘War’, ‘White Shark’, ‘Bonesaw’, ‘Opening Hell’s Gate’, and ‘Vomiting Blood’ accompany at total of fourteen tracks in total with a bonus live fifteenth number entitled ‘Sudden Death’ recorded at SWR9 @ The Barroselas Metalfest 2006 in Portugal. Here comes the pain – the bonesaw shall reign! Contact: Johan Antonissen, Beeckmanstraat Nr.3, 2170 Merksem, Belgium or Johan.suhrim@telenet.be or www.suhrim.be or www.myspace.com/suhrimdeathmetal or www.shiver-records.com