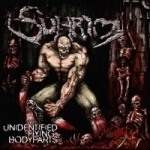 After reading this band’s biography and the subsequent 7 demos that this band has released since 1991, the mere fact this act might of called it a day before this debut album was recorded and put to market, could have simply been the natural course of things. SUHRIM might easily have been lost to annals of time and forgotten about! Thankfully perseverance on behalf of the band’s members and for those fortunate maniacs at Hybred Records lucky enough to have heard this Belgian foursome, absolutely knew they had something heavy and demented on their hands with the Death Metallers SUHRIM. Constituting of old style brutal Death in the early ’90s vein that’s body lingers to an overall sound that is akin to that of GRAVE in tuning, riffing and vocal delivery and yet altogether fused with enough of the band’s own originality and energy to take that generalized Swedish foundation onto the next level. This 2002 debut delivers twelve tracks of blistering, raw Death Metal supplied here in dose after brutal dose of lyrical infected blood and scattered cadaveric remains. Essential for those rabid fans of the golden era of Death, SUHRIM is strictly for you! P.S. SUHRIM also gets a “thumbs up” from this reviewer for the addition of “Erik The Viking” comedic interludes within this CD. That movie rules! Contact: Johan Antonissen, Beeckmanstraat Nr.3, 2170 Merksem, Belgium or Johan.suhrim@telenet.be or www.suhrim.be or www.myspace.com/suhrimdeathmetal or info@hybredrecords.se