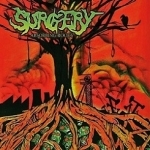 Slovakia’s SURGERY was formed way back in 2002, then put on hold until 2010, when they came back with an EP and then their debut album, "Descent" in 2012. Come 2018 and their sophomore album, "Absorbing Roots", released via the Czech label Support Underground. Upon first listen, I thought that SURGERY incorporates lots of variation in their songs. The churn out mostly groovy and mid paced Death Metal with a melodic predominance. The production is stellar. The mix is clear, maybe a bit too clear, but given the style of music that SURGERY plays, I can understand why they went for this and not a muddier or "old school" sound (man, I hate that tag, by the way). I mean, the music is sharp and aggressive, so why go with a crappy production? No. All instruments have their place and all in all, this is heavy as a ton of bricks like it should be! The guitar tone is thick and gnarly and both Rado and Miro put out some really good riffs, specially when they cross over to the melodic side of the spectrum. I really liked Hrdza’s bass lines and overall sound. He lays a reliable foundation for the guitars and keeps a tight groove along Peter’s solid drum work. The drums are a tad on the trigger side, in my humble opinion. But nowadays, one should expect that from most bands out there. Last but not least, Rasto’s vocals are consistent; deep growls mixed with several high pitched screams that add character to his performance. To summarize, "Absorbing Roots" is a Death Metal album done with conviction. Especially because the early 90s influences are undeniable. I didn’t expect less from musicians that know their craft and that have been around for some time now. Now, if you ask me about those 90s influences, well, I heard mainly SENTENCED’s "Amok" mixed with early AMORPHIS’ "The Karelian Isthmus". Not a bad combination at all! Check out the band here: www.facebook.com/surgery.poprad. And their label here: www.supug.cz