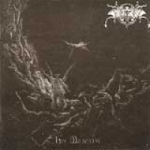 As nowadays most people seem to have forgotten how Black Metal has to sound and to be played and everyone seems to think of DIMMU BORGIR playing that kind of music (which they definitely do not by the way) here’s the right answer to give them on questions not yet uttered. Dark, filthy and obscure yet brutal Black Metal is what you get here. This is already the third album of Swedish SVARTSYN, but at the same time just the second that saw the dark of the night. Don’t ask me what has become of the real second one. Their first album “The True Legend” (Folter Records 1996) suffered from a really bad sound. “… His Majesty” doesn’t, in contrast, it contains a great underground production, very raw and intense. Musically SVARTSYN are somewhat between the Norwegian Black Metal style (early DARKTHRONE) and the Swedish Black Metal style as for example early (!) MARDUK or THRONE OF AHAZ. So you see, it is far away from being nice or mainstream. Should be the right feed for all you hungry dark souls out there. By the way, the artwork and layout totally fits to the whole concept, paintings by Gustave Dore kept in dark grey and dark mystic band pictures. SVARTSYN invokes cursed Black Metal!