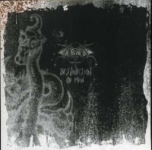 Already released in 2003 Swedish SVARTSYN’s fourth full-length (the previous ones are "The True Legend" – 1999, "His Majesty" – 2000 and the never separately released "Bloodline", which came out on a DLP with its predecessor also in 2000) is another fine example of first class Swedish Black Metal. With bands like WATAIN, ARMAGEDDA, FUNERAL MIST, the revoked OFERMOD, ONDSKAPT there is a good number of fantastic inspired-sounding and spirit-filled, highly creative Black Metal acts in Sweden and SVARTSYN can definitely be included in this listing. Though "Destruction Of Man", unlike the split with ARCKANUM (review on this website somewhere) does not blow you away instantly, its impressive dark ambience and haunting atmosphere develops its true force after you have listened to the album several times, with lights out of course! Recorded at Necromorbus also production-wise the band has recognized the signs of the times and comes across powerful yet preserves a distinct rawness mandatory for this kind of music. The songwriting solely done by guitarist / vocalist Ornias is characterized by dynamic tempos, hatefully brutal and violent passges, has some tiny melodies to offer at times and dares to slow down casually, too. Unlike e.g. WATAIN who have always a number of Black Metal "hits" on each album, "Destruction Of Man" works best as a whole, as an entire pitch-black musical stream you flow on when listening to it, to put it in a figurative manner. It’s hard to make out exceptional songs, since the album as a whole is exceptional. The musical variety ranging from traditional chord-strumming to bewitching melodies and even slightly thrashing parts, the strong and well audible bass-playing, the morbid, capturing voice of Ornias, the damn cool and heavy drum-sound are the elements that turn this misanthropic, satanic work into a mesmerizing and atmospheric album, that’s far away from being another incarnation of raw DARKTHRONE-ian Black Metal. SVARTSYN have an individual identity and a convincing gripping musical and lyrical style that should delight anyone into the aforementioned acts or simply over-the-top, long-lasting Black Metal. Give this album at least two listening sessions and you will agree! http://paginas.terra.com.br/arte/soundriot/