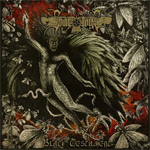 The Swedish stalwart of dark and ominous Black Metal SVARTSYN, dictated by Ornias since the unholy formation year of 1993, has come a long way all the way from the band’s demo days, up to the band’s 7th full-length record, titled "Black Testament", released on the Polish label Agonia Records. Ornias, the man behind this ‘blacker-than-thou’ Swedish Black Metal squad, has very devotedly been spreading Hellfire and brimstone through his whole career via SVARTSYN, making his band one of the most consistent Black Metal acts out there over the past years. "Black Testament" really doesn’t show SVARTSYN under any different lights compared to the band’s couple of previous releases except probably just strengthening the band’s status in the Black Metal community as one of the most noteworthy and convincing sounding Black Metal troops that are out there nowadays to smash some holy icons down. Ornias has done a great job in the sense of complexity and progressiveness of his Black Metal approach, not taking any kind of shortcut either music-wise or artistic-wise where the fence is the lowest. I cannot help thinking of a band called IMMOLATION how they have challenged themselves within Death Metal; testing some certain limits during the band’s songwriting process. SVARTSYN basically does the same in Black Metal, pushing the envelope – and on this record, even harder. "Black Testament" is undoubtedly Ornias’ most ambitious work to date, in which the guy has taken lotsa time to get to the point where the songs start offer to its listeners more than the ‘meat & potatoes’ concept content-wise. It’s difficult to not enjoy his work on "Black Testament"; SVARTSYN keeps on kicking our asses constantly – now and undoubtedly in the future as well. Hailz SVARTSYN – and hailz Ornias! More about SVARTSYN at www.svartsyn.com, label: www.agoniarecords.com