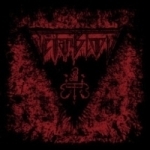 The subgenre frequently referred to as bestial Black Death Metal although once among the most elite and undefiled areas of Metal, has been degenerating rapidly in recent years. Overrun by an endless parade of cartoonish bands releasing albums featuring derivative and uninspired songwriting and album covers depicting machine-gun wielding goatmen, bestial Black Death has become as watered down as the raw Black Metal scene. This may be attributable to the fact that both subgenres appear to the novice to require little in the way of actual talent and skill. In much the same way that countless bands believe that corpsepaint is the only pre-requisite to playing raw Black Metal, so many other bands believe that gasmasks, bullet belts, and goats are sufficient to master the art of bestial Black Death. Nothing could be further from the truth, of course. Spain’s TEITANBLOOD are poised to reclaim this sound as a serious and meritorious one. Rather than cater to the childishness typically associated with this style, TEITANBLOOD imbue their music with a seriousness that this strain of metal has long been lacking. There is simply no flaw or weakness in the recordings on “Black Putrescence Of Evil.” Every song is merciless and cold and elevates the listener to a level of extremity seldom captured. This CD, released by one of the finest currently active labels, Nuclear Winter Records, compiles the band’s demo alongside the three tracks from their split EPs (with PROCLAMATION and NECROS CHRISTOS). The first six tracks comprise the “Genocide Chants In Apolokian Dawn” demo released in 2004 and are easily the strongest tracks on the CD. The remaining tracks taken from the split EPs have a more palatable production value, but lack (only slightly) the dark intensity of the demo. Based on repetitious, evil chord progressions and drum fills in the style of VON, but produced and played with the ferocity and intuitive character of BLASPHEMY, this demo represents a new plateau for this style of Metal. Though some may complain of the production that it lacks sophistication or the guitars are frequently inaudible (save for the shrill, attacking leads that cut across the songs à la SLAYER and BLASPHEMY), the recording seems to be entirely crafted with intentionality and purpose. Ritualistic, sincere, and pure, TEITANBLOOD’s music is derived from primordial instinct rather than analysis and imitation. Their purpose, it seems, is not posturing or gaining status in the underground, but rather to unlock the gates to a more elemental and obscure state of consciousness through sound. This is not music to which one is meant to drink and socialize. This is deeply introverted music designed to expose one to regions of the mind associated with ancient and sinister forces, and it should be consumed in such a way as to facilitate this unveiling. This CD provides a glimpse into the realm of a band that is surely going to be touted as one of the most advanced in extreme Metal once their debut album is finally released and is essential for anyone who delves even casually into this style of metal. This CD can be ordered directly from Nuclear Winter Records.