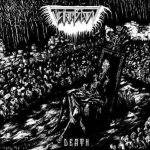 There was much talk about "Death", the new release of TEITANBLOOD, already before its release. Their label Norma Evangelium Diaboli announced, that TEITANBLOOD "will correct the misconception about Death Metal being music", so it made me a bit curious to listen to their new output in order to find out, what they wanted to point out with that. And yes, their concept brings some new festered breath into this rotten genre. Normally everybody thinks of DISSECTION when it comes to Black Metal influenced Death Metal. But TEITANBLOOD manage to play Black Metal influenced Death Metal in its rawest and most primitive, yet very technical form. Black Metal can only be mentioned as an influence when it comes to the rawness of their sound and the partly used blast beats. This album sounds like the Death Metal version of "A Blaze In The Northern Sky". Raw and dirty sound but definitely Death Metal, influenced by old school stuff like POSSESSED and early DARKTHRONE, the time when the old pioneers of Death Metal developed their style from raw and primitive sounds into a more technical direction by improving their musical skills. To classify their sound into the bestial Black / Death genre gives a small hint of their direction but these guys are going a lot further. I never heard a band before, that managed to play that kind of raw and dirty Death Metal, but with such a rotten, filthy power and a perfect production, not sounding polished or overdone at all, but worshipping their music by using modern recording standards. This is not just another filthy Death Metal album, this is an ugly experience showing what happens, when genres like Death, Doom and Black Metal naturally melt into a new rotten abysmal bastard of hellish Metal music withount any boundaries and limitations. Another proof that music can be raw and primitive even though the songs are very technical. Besides the current output of CORPSESSED, one of the early Death Metal highlights this year for me. www.teitanblood.com, www.noevdia.com