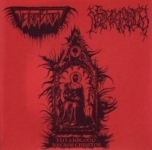 Vinyl collectors beware! This 7" was already pretty much sold out at the label directly before it even got released, so obviously there must be something special about it. And it is! After the rather cool CHARON 7", Sepulchral Voice Records returns with an even stronger follow-up now: a split EP of the two very promising underground acts TEITANBLOOD and NECROS CHRISTOS. While Germany’s NECROS CHRISTOS (featured with the track ‘Baptized By The Black Urine Of The Deceased’) already managed to build up a die hard following with their previous releases (and therefore should be known by many of you reading this), there’s not really much info on the net when it comes to TEITANBLOOD… All I found out is that they’re hailing from Madrid / Spain, that they put out a demo in 2004 ("Genocide Chants To Apolokian Dawn") and another split EP with PROCLAMATION last year prior to this split 7" EP. Haven’t heard any of those (yet), but if they were of a similar quality as their contribution to this release here (‘Infernal Abomination Of Death’) you gotta remember their name from now on! Musically both bands fit together extremely well, because they seem to share a similar vision when it comes to blackened, blasphemous old school Metal of Death. This is pure underground stuff, completely unimpressed by anything that’s been happening in the "scene" lately. TEITANBLOOD as well as NECROS CHRISTOS come up with a raw, very intense and overall very sinister atmosphere and never sound retro or anything. What blows out of the speakers here just feels very natural. The songs easily could’ve been written and recorded in the late 80s / early 90s and both perfectly fit in between classic demo stuff from Scandinavia, the US or Brazil. The EP comes in a black’n’red sleeve with a totally fitting morbid artwort. So, all I can say is: order a copy somewhere before you regret it in the years to come! www.sepulchralvoice.de