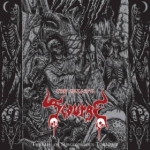 THE SATAN’S SCOURGE are a band from Colombia (meanwhile relocated to Argentina) and this is a re-release of their first full-length album, less than a year and a half after its original release in their home country. This is total old school South American Black / Thrash / Death Metal. The production is bad, probably deliberately so, with a trebly, fuzzy, reverberating but very aggressive sound. The drums are insanely fast and noisy, the guitars are distorted and violated and the vocals spew evil lyrics in the vein of the forebears. Technical prowess is more focused on aggression and chaos than any actual proficiency… check for instance the chaotic solo at the beginning of ‘Betwitx Pestiferious Beast’. But if it sounds somewhat amateurish, there is also an overall feel that invokes the old age of underground Black / Thrash whose sincerity I tend to believe more when I’m listening to South American bands as is the case… a matter of prejudice I guess and acknowledge. The songs are short, and that’s how you can have a 10 track full-length CD last a mere 19 minutes 25 seconds. This European version I’m reviewing is a little longer, though, as it includes a cover of the infamous ‘You Don’t Move Me (I Don’t Give A Fuck)’ by BATHORY. It somehow manages not to have a better sound than the original. The other cover version included is ‘The Crucified’ by IMPALED NAZARENE (a choice that well matches THE SATAN’S SCOURGE’s sound), so you see they enjoy honouring their influences, as they have also done a cover of BLASPHEMY in the past. As for the actual album, you get a short but intense trip… After an adequately creepy intro you are treated to a chaotic and aggressive Metal massacre somewhat similar to ORDER FROM CHAOS. Actually, Bloodthirsty Damnedbutcher’s vocals sometimes remind me a lot of Pete Helmkamp’s. But there is rather more. There is some instrumental stuff, there is ‘Vejación Maldita’, a song in Spanish about grave desecration that is an absolute emulation of 80s underground Metal. There is ‘Tortured Down In The Crypts’ that almost seems as if it might have been present in SARCÓFAGO’s “I.N.R.I.”… and it goes on. There is a lot to be liked for the fan of the most obscure and primitive sounding bands of satanic, morbid Metal of the past, mainly the most chaotic and aggressive. If you are one, go to www.myspace.com/satansscourge, www.tfhrecords.com.