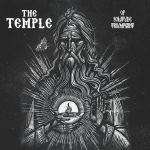 THE TEMPLE
Of Solitude Triumphant
(I Hate Records)
49:57min

Ahhhhh Greece. There seems to be a wave of epic music coming out of there. Greek Metal is nothing short of diverse and glorious in many ways. The bands tend to stretch the limits of what normal Metal is and can be, shaping it into something new. And THE TEMPLE is no exception. Consisting of Father Alex on vocals and bass, Stefanos and Felipe on guitars and Paul on drums, the band emits a doomy, slowburn sound that remains consistent throughout. Their second full-length “Of Solitude Triumphant’ soaks up the turmoil in our lives and drains it through a rigid strainer. ‘Me To Lichno Tou Astrou’ opens the album with a beautiful choir that I could honestly listen to for hours in peaceful bliss. It leads into ‘The Foundations’, a doom-laden, almost proggy track with the guitars delivering a mid-paced riffage with the drums slowly pounding and the clean vocals singing in stunning, almost chant-like altitudes. Going track by track isn’t really necessary in this review as each and every song maintains a balance of slowed down vibes and harmonious vocals that rise and fall in passion and power. This isn’t a band that has any desire to be brutal. This isn’t a band that speeds thing up at breakneck speeds. And this isn’t a band that attempts to be someone they’re not, or mimic any others. They’re in a reality of their own, and it’s satisfying. So, sit back, play it so loud the aura of the music envelopes you, close your eyes and be swept away into a world unlike our own. THE TEMPLE will swell your consciousness and soothe your metal soul. For more info, check out www.facebook.com/the.temple.doom.metal, www.facebook.com/ihaterecords