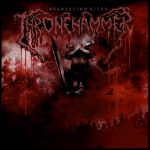 It was nearly two years ago that the first full length album from THRONEHAMMER crossed my path and really left an impact. “Usurper Of The Oaken Throne” was and still is one of those Epic Doom Metal records that are always a joy to listen to, especially as it has even grown with time. So I was very much looking forward to the new album “Incantation Rites”, even more after I got an amazing first impression of the album. And I was not disappointed – to the contrary, my expectations were even surpassed! The connection of four German Doom Metal Maniacs and Britains Metal institution Kat Gillham used the times of Corona to record a monument of Doom that outshines its predecessor. “Incantation Rites” is more Epic, more Doom and more Metal! And it’s an improved THRONEHAMMER all the way. The songwriting is even more diversified and thus still both progressive and catching. And Kat outdid herself with a superb vocal delivery that shows all the facets of her voice, from Death Metal styled growling to epic melodies. Starting off with the mainly driving and utterly dark ‘Incantation Rites’, that unfolds its magic within 14 minutes, showing a lot of what THRONEHAMMER is about. The hard, rather classic Metal influenced ‘Thy Blood’ and the raging doomer ‘Eternal Thralldom’ that stirs up to rebellion are the two shorter tunes here, both finishing before the ten minute mark. These two are the least epic songs as well. But with ‘A Fading King’, THRONEHAMMER pull out all the stops and deliver a masterpiece of Epic Doom Metal! The guitar harmonies on this monolith still give me goose pimples, even after listening to it for the twentieth time. Nearly any other Epic Doom Metal band would sacrifice anything to write such a song! It’s simply a moving and gripping song that gets under the skin, pure perfection in Doom! But the final three songs are nearly as fantastic. ‘Beneath Black Cloudmasses’ impressed me with harmonies and great vocals again. The quiet breaks and the guitars are absolutely stunning. With ‘Devouring Kingdoms’, THRONEHAMMER present their most variable track, which even has some slight hints on (Post) Black Metal in its atmosphere. And the final ‘Of Mountaintops And Glacial Tombs’ surprised me with some distinct trips into Blackgaze that go along perfectly with the feeling and the atmosphere that reminded me of the mighty WINTER. So after listening to these extremely fantastic 75 minutes of doom, gloom and epic, I can only recommend “Incantation Rites” to any Metalhead around the world. THRONEHAMMER set the bar extremely high for all other releases this year who might be the “Album Of The Year”. Find out more at www.facebook.com/thronehammer and www.facebook.com/supremechaos.de