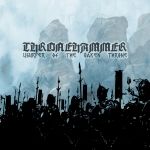 THRONEHAMMER
Usurper Of The Oaken Throne
(Church Within Records)
77:41min

There’s news from the Doom Metal front! THRONEHAMMER, a band (or project) with members from Germany and the UK, is here with their first full album “Usurper Of The Oaken Throne”. And what a pleasure of an Epic Doom album it is! Well, six very long songs in nearly 80 minutes are of course not everybody’s pleasure. But if you’re into Epic Doom stuff, THRONEHAMMER will surely be a band for you. Any riff on this album is both epic and heavy as fuck, driven by slow beats and guided by the variable voice of our staff regular Kat "Shevil" Gillham. The opening ‘Behind The Wall Of Frost’ already is a statement, a 17 minute long monolith that reminds me of the early stuff from WHILE HEAVEN WEPT as far as the atmosphere is concerned. With ‘Conquered And Erased’, we have a hymnic tune that is as driving as Epic Doom Metal can be. The longest song on this album is also the most diversified one. ‘Warhorn’ runs over 19 minutes and reminds of Italian Epic Doom from the 1990s in the beginning, bands like DOOMSWORD for example. A few breaks bring along some pretty fine ideas and surprises, yet I’m quite irritated by some odd keyboard effects. But when the warhorn sounds, it is an overture for the final battle of this song, a delicious low tuned Doom heaven. Despite this fantastic moment, my two favourites on “Usurper Of The Oaken Throne” are the two shorter songs. ‘Svarte Skyer’ is based on very heavy riffs and reminds a bit of SOLSTICE, while ‘Thronehammer’ is a pretty catchy and unbelievably heavy band anthem. The title track ‘Usurper Of The Oaken Throne’ might be the least interesting song on the album, epic and heavy, of course, but a bit too unspectacular compared to the rest of the album. Yet this is complaining on a very high level. With this album, THRONEHAMMER have delivered a damn great Epic Doom Metal album, one of the finest in years. For more, check them out at: www.facebook.com/thronehammer, or visit: www.doom-dealer.de