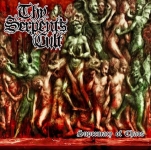 Chile’s evil Death Metal brethren of THY SERPENT’S CULT released their third full length album "Supremacy Of Chaos" late last year, an album that would turn to be the last from the madmen’s hands, as they disbanded not that long after having the album ready for release. Though three of the members are already ready with their new entity EVIL HATRED, Death Metal in the same punishing vein as THY SERPENT’S CULT. The band is delivering brutal Death Metal influenced by especially the American scene in the first nineties, which was a nice period of great Death Metal, especially DEICIDE, MORBID ANGEL, MONSTROSITY, IMMOLATION and the heavy likes are shining through, mixed with the raw chaotic feel, that only can be brought forth in South America, so a lethal dose of necksnapping carnage. It’s a damn shame the band has disbanded as they were on a damned wellpaved path to Death Metal supremacy. We are getting many great riffs, headbanging parts, crafty rhythm patters, straight forward brutality, and a growl from out of this world. I’ve really enjoyed the past releases from this band, and the swansong doesn’t stand back for the great past. This is Death Metal supremacy of chaos, this is the past brought back to life! www.myspace.com/thyserpentscult, www.ordomcm.com