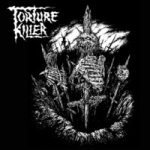 The Finnish Deathsters TORTURE KILLER are back; I mean, back with their 4th full-length studio album, titled simply "Phobia". The band’s 3-track EP, "I Chose Death", which was released last year, also introduced Pessi Haltsonen as TORTURE KILLER’s new lung shredder. Juri Sallinen who handled vocal parts in the band’s previous full-length, "Sewers", in 2009, stepped aside from the TORTURE team, so it was obvious that a new vocalist hunt would not turn out to be that easy for the rest of the guys. Gladly, Pessi Haltsonen (also in RETALIATORY MEASURES), proved so much out from himself on the "I Chose Death" EP, to be the man to take the vocal duties in TORTURE KILLER. "Phobia", these Finns’ 9-track opus, continues severely raging on from the same deep footprints where TORTURE KILLER left off on "I Chose Death". Certain type of an unexplained catchy grooviness has always been an integral part of TORTURE KILLER’s sound – and on "Phobia" they have made no exception to that rule either. It’s amazing how much pleasingly sticky grooviness one band can pour in for just one album: each song on "Phobia" basically screams to be loved – and those screams have so well been answered too. "Phobia" is the kind of album I somehow expected TORTURE KILLER to write at some point of their career. That golden momentum of whatever creativity and maturity has truly been reached now on "Phobia". Even Chris Barnes got another invitation from the TORTURE team for some guest vocal appearances on the band’s new album. I myself have never considered Mr. Barnes as that great Death lung among other Death throats but in a song called ‘Written In Blood’ I must admit he has indeed done a pretty darn terrific job vocal-wise. Besides Chris’ kinda trademark-ish Death growls in this aforementioned tune, ‘Written In Blood’ also clearly turns to be one of the most experimental yet most clever songs TORTURE KILLER have ever penned down during their entire career, a song called "I Chose Death’ still keeping no. 1 spot in my ultimate books of Death as far as the band’s entire cavalcade of songs is concerned anyway. Undoubtedly many can also hear some musical connections to SIX FEET UNDER and OBITUARY on "Phobia", but then again, is that so surprising after all? Those influences have basically always been there, haunting strongly behind TORTURE KILLER’s attempts for their world’s enslavement. The bottom line, however is, TORTURE KILLER have very honestly speaking, written their best album to date, in which the band’s new Death throat Pessi Haltsonen couldn’t have succeeded at any better with his convincing vocal lines either. At the end of the day, I cannot do much else but recommend this album warmly to every Death Metal digger out there. TORTURE KILLER’s death cave can be found at: www.torturekiller.com, label: www.dynamicartsrecords.com