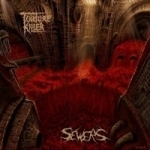 The Swarm is gone, Chris Barnes is gone, Metal Blade is gone but one thing remains – the Finnish Death Metal institution TORTURE KILLER are still haunted by the ghost of the former leading act SIX FEET UNDER. There will be for sure not a single review of “Sewers” which can avoid mentioning their American idols. But TORTURE KILLER are more than just a vague copy – their third release is breathing the old spirit of the first SIX FEET UNDER masterpieces (oh, they recorded “masterpieces”? Never noticed that – Frank) and “Sewers” is a strong Death Metal release with a massive dose of groove. The album is offering 8 (short) songs and even if some are more than just inspired by their big brother- just listen to ‘Coffins’ which sounds like a mixture of ‘Human Target’ vs. ‘War Is Coming’ -TORTURE KILLER are also introducing some more Swedish Death Metal elements (nice atmospheric guitar part) to avoid the American overkill. Everybody who prefers Death Metal with a “Love at first sight” effect and / or the SIX FEET UNDER back catalogue can buy this album blindly and furthermore test the live compatibility on the coming European tour with FACEBREAKER and DEMONICAL. www.torturekiller.com, www.myspace.com/torturekiller, www.dynamicartsrecords.com