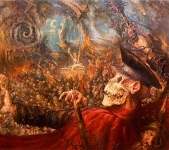 Strap on your boots and lock and load, war is approaching, and these two German bands have started to soften the enemy with a blitzkrieg of 10 tracks of blackened Death Metal. TRUPPENSTURM starts out with a frenzy of of chainsaw riffing, galopping drums and a reverbed growl, intense and tense Death Metal with a chaotic Black Metal aura over it. A dark and doomy output of war and plague, with a great atmosphere that drives the music, which is decent, though not much more, as it has been done before and better, also by these guys. Though there are glimpes of greatness here and there, there are some good guitar parts and well done extreme breaks. I just miss some consistency and a better drive and flow. As a small treat we are getting a neatly done version of ABSU’s ‘The Thrice Is Greatest To Niningal’ from "Barathrum V.I.T.R.I.O.L.". If all the tracks had the same drive and energy as the cover version, I would have been a happy camper. THORYBOS is continuing the attack, where TRUPPENSTURM left off, downtuned chaotic Death Metal entangled in chaos and darkness, the guitars lay deeper and more noisy, the vocals more heavily reverbed and the pounding attack as lethal. Again we are getting some intense and dense Death Metal with inspirations from darker sides of the palette. Again a decent output, that doesn’t leave me extatic. "Approaching Conflict" is a good resort on a dark tired day, when you need to soothe the soul with some intense aggression to set the mind free, though I doubt I’ll remember this record in a year, as I miss that last bit of inspiration. Though fanatics of this exact style of Death / Black Metal will without a doubt gouge on this release, as it is carved after the classic mold, which ain’t that bad. More info about doom, darkness and the war command can be found here: http://truppensturm.bandcamp.com, www.penetrationhammer.de/thorybos/thorybos.html, www.van-records.de