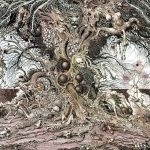 Even though the circumstances, the stream of new releases keeps flowing constantly, and this time the poisoned soil expels the sophomore album of ULTHAR, a Death trio involving members of VASTUM, EXTREMITY and SPIRIT POSSESSION, amongst a bunch of other related bands. What first drags the attention is the disturbing artwork starring a shapeless genital creature, setting the tone for a degenerated and chimerical Black / Death Metal yet to come. ‘Churn’ breaks the ice in just 2:30 minutes of undying and relentless vomit spill, with nothing less than blast beats and growls supporting the duty of opening the waters. Then ‘Undying Spear’ changes the direction with some monolithic voices in the background and some skilled acoustic guitars as a prelude to a Black Metal twist with dissonant tremolo guitars which bring memories of the Scandinavian scene from time to time. Another remarkable song which changes the Black / Death Metal direction, entitled ‘Through Downwards Dynasties’, begins with some screams from below… but then, out of nowhere, the track surprisingly crawls towards a Black / Thrash Metal pace, with some reminiscences of AURA NOIR running down through a cursed and raging tempo in comparison with the rest of the release. At this point of the album, the words have been said for the rest of the songs, which intertwines and alternates between a mixture of Black and Death Metal as it develops discordantly on their 8 tracks. ‘Cudgel’ and ‘Narcissus Drowning’ are the most interesting ones of the B side because their focus on the riff and neat dynamic drumming abuse, but on the other hand as the songs keep evolving on the stablished formula and information overcharge, the record ends abruptly with a solid snare hit, leaving (deliberately or not) an awkward feeling afterwards. Clearly this work tends to focus the composition through the guitars, where the arrangements are constantly changing without repeating themselves with a clear direction despite the abstract evoked leitmotiv, both in its lyrics and its aesthetics. During the correct 36 minutes, you will find a similar path walked by TIMEGHOUL / BLOOD INCANTATION in terms of composition and direction with Black Metal apparitions. “Providence” dare and tends to roam between two different but compatible worlds, giving birth to a great aberration rather than a simple and squared thing. For those who are looking into something courageous and refreshing, “Providence” is an interesting abomination to check. Recommended. www.facebook.com/ulthar-386850314846106, www.20buckspin.com