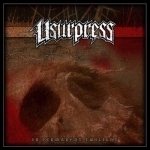 Just a few weeks I ago, I proudly presented USURPRESS’ first longplayer "Trenches Of The Netherworld" here. Now the always busy guys at Selfmadegod Records put out another (re-)release of these Swedish Death Crusties. The recordings of "In Permanent Twilight" were originally planned for a split release in 2011. But since this release was postponed, they were released on Plague Island as a 12" and on CD by Selfmadegod. These seven songs (plus an Intro) were USURPRESS’ first recordings after a demo, therefore they still sound quite different from the stuff on the album. The band’s aim to combine Death Metal with D-Beat Crust was not yet fulfilled here. Listening to "In Permanent Twilight", I thought I have a metallic D-Beat record here, with lots of influences by the great DISFEAR, WOLFPACK or SKITSYSTEM. Which doesn’t mean that the EP ain’t a fine one as well. The intro ‘Pleasing The Usurpress’ is followed by a vicious massacre called ‘Unpunished’. Then ‘I Am An Empire’ marks the highlight of the album: A D-Beat monster, more Crust than any other song here. But also ‘The Initiated (Will Fall)’ and ‘Embrace Your Non-Existence’ please my need for speed very well, especially because these two come along with some reviving breaks. ‘Primitive Majesty’ sets in more down-tempo with an even doomy break, before the song turns out to be another damn fast riff-massacre. ‘Downtrodden Isolation’ proves the bands Hard- and Speedcore roots with a bass intro piece that reminded me of BEYOND POSSESSION. But the song has surprising melodic breaks as well, so I put my thumbs up once again. The closing title-track ‘In Permanent Twilight’ also takes no prisoners. Add a raw, unpolished sound and we a fine one for all those D-Beat aficionados here. So, once again, you have to check: www.usurpress.com, www.facebook.com/usurpress, or visit the label at www.selfmadegod.com