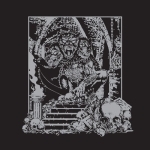 The Swedish quartet USURPRESS started in 2010 in Uppsala with the aim to combine the brutality of Death Metal with the hate of Hardcore and D-Beat-Crust… Sounds like heaven to me! Up to now, USURPRESS released a 12", a 7" and two split 7"es with BOMBS OF HADES and PYRAMIDO, all on underground labels. Too sad I haven’t heard any of these vinyl gems yet, so I have only "Trenches Of The Netherworld" to find out wether they reached their aim or not. Eleven songs in little more than 33 minutes is quite promising on the first look. The opener ‘Black Death On White Wings’ starts off with a nice, quite epic intro-piece before a downright D-Beat inferno sets in and crushes everything epic under a riff massacre. ‘Effigies Burns Across The Wastelands’ comes along a little more tamed, even though the D-Beat can’t be tamed for too long. Old school Sweden Death junkies will love the beginning of ‘Coronation Of The Crippled King’ for sure, but all Crust lovers won’t have to wait too long for their favourite beat. But this one also surprises with a middle piece with industrial vocals and beats. ‘The Wooden Sceptre’ has a fast groove that would fit perfectly to any newer DARKTHRONE release, while ‘The Colours Of Darkness’ trample everything under hoof before the middle part delivers an atmospheric doom part. The title track ‘Trenches Of The Netherworld’ is a song NIHILIST could have been proud of, maybe the most old school Death Metal song here. Damn, the level is still on very high here, and ‘The God Eaters’ don’t lower the bar. Pure hate and a D-Beat inferno! And even though the title sounds epic and the intro piece hint it, ‘In The Beginning (Ended Yesterday)’ isn’t really the epic one here, but a crusher with some groovier parts. ‘Dethroned By Shadows’ surprises with a fiddle intro, with the band joining in, but soon the band kicks the fiddle aside and the song evolves into a Death Metal monster. The intro piece to ‘I Stand Above Time’ reminds me of good old DISMEMBER, but turns out to be a Crust monster with Death Metal breaks. Finally we have a merciless D-Beat massacre called ‘Seduction Through Bloodshed’, that leaves no question at all. Aim reached with full score, I’d say! Imagine a devastating bastard of DEATH BREATH, NIHILIST, WOLFBRIGADE and SKITSYSTEM with Death Metal vocals and you might figure out what you have to expect from this killer album. If you need further info on one of the first hopefuls for the album of the year, check: www.usurpress.com, www.facebook.com/usurpress, www.selfmadegod.com