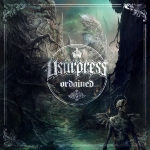 With their first offerings up to their first album “Trenches Of The Netherworld”, Swedish USURPRESS were real experts in combing Crust and D-Beat with Death Metal. This album was more or less a blueprint of how blending these styles sound best and it highlighted all the smaller stuff they released before. But last year’s split 10” with BENT SEA saw a change in the sound and style of USURPRESS. Elements of Sludge and Doom found their way into the music, thus both broadening the horizon of the way they sounded and giving it an even more unique note. Now “Ordained” is here, the second full length strike of USURPRESS, and the album takes the path of the split consequently. The production has taken a turn into the spheres of bands like BARONESS. And it is pretty sure that not anybody who liked “Trenches Of The Netherworld” digs “Ordained” either, for it sounds a lot less Death Metal. In fact, the focus is more on the crusty and sludgy side for sure. Yet, there’s still food for the Deathheads here – check the AUTOPSY styled beat in ‘Storming The Mausoleum’ – as well as for lovers of the D-Beat – the opener ‘The Heart Of The Last Kingdom’ or ‘The Eyeless Spectator’ will please them. But there are also very original ideas en masse on “Ordained”. ‘Fire In The Minds Of Men’ puzzles the listener with an odd middle part that features some strange vocals, while ‘Insignia Of Illumination’ or ‘Deny Salvation (Wolf-Like Dogs)’ somehow remind me of DOOMRIDERS. In ‘Ritual Warfare’ you’ll find some elements that can be described as Post Rock in the end, whereas ‘Fan The Flames Of Madness’ is rooted in midpaced Doom Metal and surprises with some post Punk guitar licks. Confusing? Yes, but that’s not all here. There’s an instrumental here as well called ‘Lóthlorien’, that comes along somehow psychedelic. With ‘Embracing The Vultures’ there is a final rather straight smasher before the mainly acoustic outro piece ‘As The Monolith Comes Alive’. This one sounds a little bit like the overture of a monumental song like ‘A Tidal Wave Of Fire’ (from the above mentioned split) and heralds great things to come. I’m waiting for these things… If you’re quite open-minded and have some time to spend it with a very diversified and unique album, you will for sure like “Ordained” as much as I do. This album just needs a few run-throughs to really unfold. Check: www.usurpress.com, www.facebook.com/usurpress or www.doomentia.com