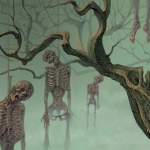 I have been following this great Swedish band for quite some time. Their debut album is still spinning around from time to time. They are a band that plays Death Metal in the D-Beat way, meaning we have a strong DISCHARGE and MASTER influence through their more old school sound in the early ENTOMBED and DISMEMBER sound. Also I have heard the word “Crust” attached to these guys more than once. Make no mistake, this is Death Metal at its core. I sense they have become a bit more melodic at times, but without losing heaviness in that process. Also in the meantime I can also hear some bits of psychedelic arrangements here and there. One thing I find great in this album is the killer guitar tone, it sounds really heavy although it has a higher pitch sounding edge, really powerful. Also the music itself has become darker, they have some doomier passage where a fast guitar riff is going on encompassed by slow drum beats, thus giving them a quite suffocating atmosphere. But when they play fast, the venom comes out of the speakers! A band that is wise enough and able to play at different tempos and also being able to have such a great guitar tone is always welcome. At first listen this is as strong as everything they have done, yet more mature and diverse. If you have heard them before and like it, this is even better. www.facebook.com/usurpress, www.agoniarecords.com

Julián “The One They Call The Usurpress” Núñez

Julián "The One They Call The Usurpress" Núñez