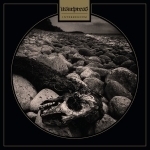 The Swedish USURPRESS are a band that always goes forwards to not go backwards. Any of their albums sounded different, from the furious mix of Crust and Death of the debut album to the more Sludge and Doom Metal influenced albums that needed a more intense care afterwards. Now they are back again with their fourth album. And it’s no wonder that “Interregnum” again sounds different. Elements of Post Black Metal styles like Blackgaze have found their way into the sound of USURPRESS as well as moments that remind of Progressive Rock and Metal. Just listen to the opening ‘A Place In The Pantheon’ – early MARILLION meets blackened stuff. The following, rather short ‘Interregnum’ is the one that sounds at least a little bit like the early USURPRESS recordings, yet this one is very much laid back in speed. With ‘In Books Without Pages’ we find a pretty unique blend of rather serene progressive parts and monstrous and dark sludgy riff cascades. And the best way to describe the rather long and mainly monolitihic ‘Late In The 11th Hour’ might be “progressive and blackened Sludge”. At least this is really hard to be pigeonholed, so I might better quit that here. The other long song on “Interregnum” is the two parted ‘Ships Of Black Glass’, that is as hard to file under any musical genre, so I guess that “progressive music” should be the best description again. Surprising breaks in this black hole of a song with sharp changes of the atmosphere characterize this one especially and this middle part with a keyboard foundation is another unexpected turn. Influences from newer Progressive Metal like OPETH are very present in ‘Ships Of Black Glass’, as well as drum grooves that remind me of MASTODON. The final two tracks are running a little shorter, yet they aren’t easier to catch anyway. ‘The Iron Gates Will Melt’ is a slowed down song with mighty riffing and a lot of breaks that even decelerate the groove. Finally, we have a song that reminds of PARADISE LOST in the era of “One Second”, with the distinction that USURPRESS are doing a lot better with ‘The Vagrant Harlot’, since this one of course features the blackened and sludgy undertones of the band. After quite a lot, really necessary listening sessions, “Interregnum” unfolds its magic and proves that USURPRESS is one of the most unique and either most progressive bands right now. Yet, their sound doesn’t appeal to anyone. So, if you’re likely to dig a progressive, yet heavy and unpolished album full of surprises, “Interregnum” is a must have! Visit either www.facebook.com/usurpress or www.agoniarecords.com