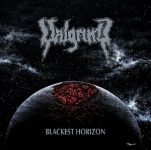 I did a review of their last EP and I was sure this new material of Italy’s VALGRIND was going to be something special. And this new album does deliver! This is killer Death Metal, that shows a band that has a lot of early MORBID ANGEL, NOCTURNUS, but in this one especially of “Testimony Of The Ancients” from PESTILENCE, even the vocals sound a lot like Patrick Mameli. I am not sure if there is some sort of concept behind this album, but at least to my ears and due to the song titles, there might be something of that. To notice is the great guitar work, I like also the way they did the solos, although melodic, they are wicked and obscure. Sometimes the melodies and overall sound of the band also reminds me of RIPPING CORPSE with a bit of later DEATH, old SEPULTURA, some old CARCASS touches and small doses of DISMEMBER. There is also a good speed/thrash influence in their sound with references to CELTIC FROST, old METALLICA and old SLAYER. So, we have a band that takes the best of old school Death Metal styles from around the globe, uses some evil Speed / Thrash, and still gets out with a very particular sound. The production is also very good, if maybe for my tastes a louder guitar would be better, but as it is it has a very eerie atmospheric tone, and also the band does sound quite precise in their performance. Even if there are things that sound a lot like other works done before, this proves that there are still bands wise enough to create something worthy. A great album. www.facebook.com/valgrindband, www.everlastingspew.com