VALGRIND was originally founded in 1993 but broke up in 2003 just to reunite in 2008. Since then the two full lengths “Morning Will Come No More" (2012) and "Speech Of The Flame" (2016) as well as the EP "Seal Of Phobos" (2017) have been released. "Morning Will Come No More" (2012) was initially released in 2012 on CD, but have been sold out for years and now Nihilistic Holocaust released this sought after release on a pro printed black tape, with color cover, limited to 300 copies. VALGRIND definitely sound different than normal Death Metal bands. Of course the base is true old school Death but VALGRIND offers a variety of dark melodies in utmost twisted format and accumulatively almost 60 minutes of Death Metal delivered in the traditional way, with killer riffs, atmospheres, obscurity, skills and a knowledge for real compositions which makes it a classic, slightly technically inspired, yet completely uncompromising Death Metal release in pure culture. Stylistically, it sounds like a brew of the second album of DEATH "Leprosy", some BRUTALITY, the most flesh-filled riffs of mid-old MORBID ANGEL, the first IMMOLATION album (mostly for the style of drums), old PESTILENCE (re-incarnation of Patrick Mameli school of vocal delivery and guitar wizardry!), perhaps very old NILE and also some old MALEVOLENT CREATION and DEMOLITION HAMMER. Here, some of these songs were composed in the 90s for the band’s first demos, then reworked later for the album’s completion. Talking about this release and making comparison to old legends it’s comparatively easy, but that won’t do them real justice, as after a few listenings from top to bottom, you will get the feeling that this is truly an underground old school Death Metal masterpiece. It is not only the music and the songs; it is the general aura of this album. It feels like it was released back in 1995 or something. The songs themselves are perfect in construction with no modern exaggerations, and technicalities, unnecessary for the style they chose to play! Of course this doesn’t take away the wrath someone would imagine when thinking of old school brutality. The riffs are monstrous, followed by mid tempo drumbeats, and that, along with the fat bass guitar and the outrageous vocals, make it, almost unbearable not to start head-banging from the first minute. It is an album full of energy that takes you in its vortex. The whole thing gets even better with some melodic interludes used here and some other creepy stuff, like ‘Dark Age’, and let’s not forget about the crisp, natural production that takes their ferocity to a new level with its raw and edgy aspect. Lyrically it talks about something apocalyptical rushing towards earth, expressed through its diseased and claustrophobic melodies. No doubt, this album needs an in-depth listening to be understood in all its diversity. It is truly a must check for every old schoolers and of course for everyone who wants to revisit the essence of old school barbarity. Explore more about the band at www.facebook.com/valgrindband and http://nihilistic-webzine-distro.fr. 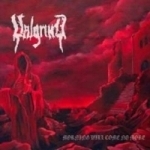 Italy is not just a fine place for pizza and pasta you can also find some fine Death Metal bands there. One of them is doubtlessly VALGRIND, which already exists since 1993 (born from the ashes of a band called NECROSPELL) but only released a bunch of demos, yet. Now after almost 20 years of existing Godeater Records from Germany thought that it would be time for a full-length and just released the band’s debut album. I can’t deny that this was a wise decision, "Morning Will Come No More" is a very varied album with rather fast, brutal straight forward parts, powerful mid paced stuff and many, many great melodic guitar leads. I really love those guitar leads which are a good counterpart to the brutality. The music could be best described as 90s US Death Metal with dark roaring vocals. I won’t drop any names cause they somehow found their very own style, sure VALGRIND does not reinvent the old school genre but the Italians don’t come too close to any of the well know 90s heroes. This album is definitely worth your attention, so get your fingers on "Morning Will Come No More" as soon as possible. I really hope that we don’t have to wait two more decades for another album by VALGRIND because these Italians are truly talented. Thumps up!!! All further info at www.facebook.com/valgrindband, www.myspace.com/valgrindband, www.facebook.com/godeaterrec