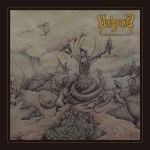 Damn! I’ve been hooked by VALGRIND since some time, and these underrated Italian wolves came back this, after their astonishing album “Blackest Horizon”, with another sequel called “Condemnation”, coronating their fourth full length. At first, the cover art gave me the impression that the music would be lighter and diffuse because of the opaque palette on decayed corpses and chimerical animals, but then I figured out that it was completely the opposite at first listening. With a production of almost 40 minutes through 10 cuts including the intro, VALGRIND delivered what they know best, and is blending mastered string skill and old-fashioned Death Metal. About the production, “Condemnation” is converging on cosmic darkness through composition and astral brightness at it sound, because the guitars and passages are sonically excited to top, but the feeling at some parts is overwhelming in terms of information. Said that, this release through each song evolves constantly without looking back, so as the variation of riffing which lurks on IMMOLATION because the ominous heaviness and pounding toms, MORBID ANGEL’s frenzy tremolo attack and even some PESTILENCE Death / Thrash glimpses on the vocalization and structures, the coherence is still there after a maelstrom of notes. In order to pick the most memorable songs, it would be ‘The day’, ’Entangled In A World Below’ and ‘Divination – Marked By The Unknown’ because of their strength and intensity as the pace keep morphing as I said before. Despite the impressive skills, the production in general seems to be so bright that it burns, specially when the soloing enhances it with the wah-wah resource, increasing the contrast of frequencies that sounds perfectly wet in comparison with the bass guitar, which it feels in the background most of the time. “Condemnation” is clearly the natural next step of VALGRIND’s pathos, and it deserves to be caught in their constellation of string webs. www.facebook.com/valgrindband, www.memento-mori.es