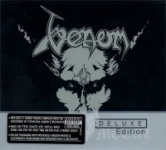 VENOM’s "Black Metal" has turned into an alltime classic for a whole generation of extreme Metal fans around the globe and even gave birth to a whole new genre of the same name… The funny thing is, that VENOM originally labeled their own style as Power Metal and not Black Metal ("VENOM Metal = Power Metal = Pure Hell!") and recorded this album in only seven days!! My opinion whether or not this album is better or worse than its predecessor "Welcome To Hell" changes almost every day, so I would rather say that both are pretty much equally strong in terms of the material they have on offer… Maybe "Welcome To Hell" has a little bonus as it only took the band three days to record… Anyway, the importance of the early works of this Newcastle triumvirate is undeniable and I can’t really recall how many re-releases of "Black Metal" alone already exist in all kinds of different formats… Vinyl, cassettes, picture discs, CDs, bootlegs etc. – it definitely must be countless by now… However, the last official one dates back to 2002 and was already kinda close to this edition here. Apart from the fact that the original "Black Metal" album material got remastered, it also had a whole bunch of extra tracks already, that you’ll find on this "Deluxe Expanded Edition" again. A different version of ‘Bursting Out’ (taken from the Neat Records compilation "60 min+"), a BBC Radio One Session (‘Black Metal’, Nightmare’, ‘Too Loud For The Crowd’ and ‘Bloodlust’), the entire "Die Hard" vinyl 12" (‘Die Hard’, ‘Acid Queen’ and ‘Bursting Out’) as well as a studio outtake (‘Hounds Of Hell’). This deluxe version additionally also has both tracks from the "Bloodlust" 7" EP (‘Bloodlust’ and ‘In Nomine Satanas’) as well as a bonus DVD and a different booklet with several classic pics and rather fresh interview comments by Cronos himself (unfortunately the lyrics, that were still part of the 2002 edition, are missing because of that now). The DVD features VENOM’s alltime classic live show at London’s Hammersmith Odeon from June 1st, 1984. It was originally released as the VHS video "The 7th Date Of Hell" and features 11 tracks, as well as a bass and guitar solo from Cronos and Mantas respectively (total playing time approximately 60min). Additionally you get the 3 promo videos for ‘Witching Hour’, ‘Bloodlust’ and ‘Nightmare’… The latter two taken from 1985’s VHS "Video Nightmare" (too bad they didn’t include the entire release on here as that also featured ‘Rip Ride’ and ‘Die Hard’). But as this is the first official DVD release of that legendary Hammersmith show ever since the VHS came out way back in 1984, it should be reason enough already for every die hard VENOM maniac to purchase this re-release (again). www.venomslegions.com.