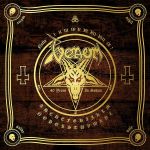 If you consider yourself a die hard VENOM fan, who collects everything that gets released by this legendary Newcastle bunch, you better make sure there’s enough money on your bank account, because there’s so many releases out there lately, that you could easily loose track. Ok, there have always been re-releases of VENOM stuff throughout the years, but it really started to pick up speed again in 2017 with the “Assault!” boxset, which for the very first time officially compiled CD editions of “Canadian Assault”, “American Assault”, “French Assault”, “Japanese Assault”, “German Assault” and “Scandinavian Assault” in one release. A year later “The Singles” boxset followed, offering reprints of five of the band’s 7″ singles, on vinyl and CD format, followed by the “In Nomine Satanas” vinyl boxset, the “Sons Of Satan: Rare And Unreleased” double vinyl / 2 CD compilation, “The Demolition Years” box (which includes all five albums with Tony “Demolition Man” Dolan on bass / vocals) and most recently there was the amazing “To Hell And Back” tape boxset from Darkness Shall Rise Productions. If all this wasn’t enough already, there’s the “In Nomine Satanas – 40 Years In Sodom” CD boxset now, which includes remastered editions of the early albums “Welcome To Hell”, “Black Metal”, “At War With Satan”, “Possessed”, “Eine Kleine Nachtmusik” and the “Sons Of Satan” compilation. Also included is a DVD with the band’s classic 1984 Hammersmith Odeon show plus the three promo videos for ‘Witching Hour’, ‘Bloodlust’ and ‘Nightmare’. If you already bought the “Black Metal” deluxe edition in 2009, you’ll already own it, since it was also included with that package back then. The rest of this boxset has also been available before already, and that goes for the booklet as well, which is the same as in the “Sons Of Satan: Rare And Unreleased” 2 CD edition. “In Nomine Satanas – 40 Years In Sodom” comes in a CD sized glossy cardboard box (similar to the “Assault!” und “Singles” boxes), each CD in it is housed in a cardboard sleeve, which is a replica of the original album cover, and the old VHS video cover was used for the DVD sleeve. I don’t think we will have to talk about VENOM’s music here, since everyone into extreme Metal will know these releases inside-out already and how important they were for the Metal scene. But, if you are a die hard collector or still don’t own any classic VENOM stuff (is there really anyone out there reading this?), this is a very good opportunity to get the most important VENOM releases combined for a rather reasonable price. For more info please visit www.facebook.com/officialvenomband or www.bmg.com