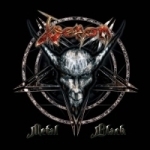 Countless times I’ve heard certain groups of people (mostly power-flower fans!!!) complaining about every new VENOM masterpiece released for us not-worthy mortals. So, for those who dislike the masters of christraping art there you go with another 60min to make your lives miserable once more! Mantas departure was one of the biggest concerns of the VENOM’s legions since he was an integral part of the band’s musical entity (he’s currently in the touring line-up of German Techno act SCOOTER! – Frank) and one cannot deny that Cronos, Mantas, Abaddon is the most beloved triumvirate the underground has ever had. Honestly, who gives a fuck about "classic" line-ups when you can have an equal or superior product with some slight personnel changes… for good maybe? The current incarnation includes Cronos (best known as Rabid Captor of Bestial Malevolence) at the vocal / bass helm, Antton (Cronos brother) bashing the skins and Mike Hickey (aka Mykus) bending the strings. Mykus is not a total stranger to the band since he was one of the axemen in the ill-fated "Calm Before The Storm" album back in late 80s. From the corrosive opener ‘Antechrist’ or grinding hammer-like ‘House Of Pain’ to devil-worshipping anthems like ‘Regie Sathanas’ or ‘Lucifer Rising’ this is 2006 upgrade of one of the most outrageous, arrogant and uncompromising bands of the last 20 years. This album bears certain resemblance to their past effort "Cast In Stone" style-wise but with a sharpened and more modern edge. A very ambitious move was to name it the way they did, they kind of managed to do it with class and not letting anyone down. By the time you read this the album will be already out so get your filthy hands on that. Recommended… SATANAS… SATANAS… SATANAS. Visit the band website at: www.venomslegions.com.