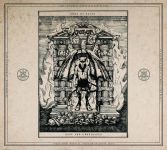 I’m really into compilations of rare and unreleased materials from classic bands, especially when it comes to legendary names. In this case we have a compilation of early works from one of the most influential bands in the history of Metal: VENOM. Yeah, the well known band from Newcastle, loved and respected by anyone who calls himself a true fan of NWOBHM, Speed Metal, Black Metal and Thrash Metal. Here we have a total of 15 songs for almost 70 minutes of VENOM’s audial history, released by BMG UK both on vinyl and CD. The compilation contains tracks from these recording sessions: “Church Hall Rehearsals” from 1979, “Impulse Studios – £50 Demo Recordings” from 1980, “Impulse Studios – Demo Session” from 1980 and “Impulse Studios – At War With Satan Demo” from 1983. First of all a special mention goes to the killer B&W front cover artwork with the typical VENOM’s baphomet enthroned above a pile of skulls and bones. The CD version is enriched by a very informative booklet that includes some interesting interviews with Cronos, Mantas and Abaddon. They tell various anecdotes about their early years, when they started playing together, their influences, the line-up changes, their efforts to find a label, the first studio experiences, how they choose their pseudonyms, the choice to give a theatrical satanic touch to their imagery etc. VENOM was born from the ashes of three different bands: GUILLOTINE, OBERON and DWARFSTAR. The first five songs of “Sons Of Satan: Rare And Unreleased” are taken from a rehearsal session recorded on a tape recorder at Westgate Road Church Hall in Newcastle’s West End on November 24, 1979. Here the audio quality is very lo-fi, due to the poor recording equipment and the resonance created by the church hall. These songs are ultra raw and chaotic; they sound more like an harsh noise wall, except for the doomy minute of ‘Buried Alive’. To me this session is quite unnecessary in the compilation, but it still has historical value because of the presence of Clive Archer (aka Jesus Christ) as vocalist. With this line-up (Archer, Conrad Lant, Jeffrey Dunn and Anthony Bray) the band recorded their next two demos: one on April 29, 1980, and the other on October 10, 1980. Both demos were recorded at Impulse Studios, Wallsend and offer to the listener a rare track called ‘Venom’ plus six songs that in 1981 became highlights of the “Welcome To Hell” debut album and “Black Metal”, classic Heavy Metal hymns such as: ‘Sons Of Satan’, ‘Angel Dust’, ‘In League With Satan’, ‘Schizo’, ‘Raise The Dead’ and ‘Live Like An Angel’ (this latter sang by Lant). All the songs are digitally remastered and have a great sound: professional and raw at the same time. The influences from the late ’70s are very present: a mixture of NWOBHM and UK Punk Rock. All the instruments are audible and Archer’s vocals are very good too. His singing style isn’t as rough as Cronos’ one, but has a stronger British Heavy Metal touch: imagine a mixture of Lemmy, Paul Di Anno, Biff Byford and Kevin Heybourne. Archer then left the band and VENOM’s line-up became a trio with Cronos taking bass and vocal duties. The last track of the compilation is the demo version of the long epic song ‘At War With Satan’, recorded at Impulse Studios on February 06, 1983. In conclusion, I recommend you to get a copy of “Sons Of Satan: Rare And Unreleased”, because this compilation is a historical testimony of the beginning of a cult band, probably the most fundamental one in extreme Metal. What? Aren’t you into VENOM? Ok, you’re nothing but a poser! More info at: www.facebook.com/officialvenomband, www.bmg.com