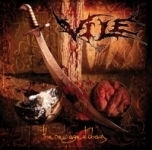 When I listened to VILE’s third full length album “The New Age Of Chaos” I immediately connected the material on offer this time to what we constantly get served by Unique Leader Records nowadays. Which means, technically very mature and extremely brutal sounding Death Metal, produced and packaged very professionally. Well, the label in question obviously seemed to share my opinion, cause “The New Age Of Chaos” will indeed hit the stores in the US via Unique Leader, while Listenable Records takes over the European part of it. When I interviewed VILE’s mastermind Colin Davis after the release of their previous album “Depopulate” he already mentioned that the band’s music has “changed with the times and that there’s even some Black Metal influence in there too…” Well, he perfectly hit the nail on its head with that statement, cause while the band could still be associated with acts like CANNIBAL CORPSE or MORBID ANGEL in the past, they have evolved into a far more intense unit of complex brutality, often a lot closer now to bands such as HATE ETERNAL, DEEDS OF FLESH, DECREPIT BIRTH and the likes. I’m not completely into those aforementioned “Black Metal influences” though, which every now and then shine through in the very fast parts on the record and are accompanied by a rather Black Metal typical vocal delivery… To me Death Metal (just like any other form of Metal) simply works best in its most purest form, but luckily the band doesn’t incorporate that too often anyway. From what I understood the record lyrically deals with the ongoing war between the western world and the Islamic terrorists, which has generally become a very popular theme (for obvious reasons) in the extreme Metal underground after 9/11. Despite the musical furiosity the band delivers on “The New Age Of Chaos”, the playing time of the album is once again a little short, especially considering the fact that among the nine tracks on offer, there’s also one short instrumental that closes the album… So, to sum it up: in terms of the album’s length not really value for money here, yet addressed to everyone who’s worshipping the current brutal US Death Metal movement for it is of the same top notch musical quality. For all further info check out www.vilestench.com or www.listenable.net.