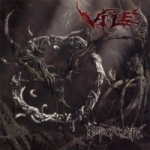 It seems Listenable Records are on the right track again having signed this Californian outfit. One more time we are dealing here with a brutal Death Metal band, but with enough imagination to raise immediate interest (at least in my camp). These four musicians are certainly not beginners since VILE was formed back in 1996, and the musicianship level is maintained extremely high throughout the album. More than once, the musicians have stunned me by their technical prowess and their sense of tightness, especially considering the intense speed factor on all the songs. Unfortunately I have never heard their previous effort (“Stench Of The Deceased”, out in 1999, and due to be reissued soon on Listenable), so I can’t comment on a possible evolution since then. Of course strong parallels could be drawn with band like CANNIBAL CORPSE and MONSTROSITY because the musical technicalities in the first place, but also thanks to the vocal delivery of Juan Urteaga who reminds me of George “Corpsegrinder” Fischer on more than one occasion. But strangely enough, the VILE sound is also very near of what the most brutal of the Polish bands have to offer, so we get the best of two worlds here. Well, I can’t say that VILE have invented sliced bread obviously, but at least they manage to come up with strongly structured songs well complimented by a deluxe production. No wonder that lyrically-wise VILE deal with the hardest edge of life (and above all: death), just refer to titles like ‘Butchered’, ‘Path To Incineration’ or ‘Eat The Rude’ and I think it is easy to make out what “Depopulate” is about. Add to this a song about a peculiarly nasty Japanese “experimentation” camp during WW II (‘Unit 731’) and you understand that VILE are not concerned by the niceties of life. “Depopulate” is not just one more Death Metal album, and VILE is certainly a band to keep an eye on. And fortunately enough we can witness with this release the return of the Polish painter Graal to the Listenable camp, it certainly made the album even more recommendable as his artwork is absolutely beautiful! So all in all, a must have! Contact Listenable Records through www.listenable.net for further information, but I advise the VILE dudes to seriously update their website (www.vilestench.com) because it begins to putrefy!