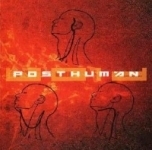 Fuck this is damn hard to review, because I’m not familiar with Electronic / Industrial Metal at all – I know MARILYN MANSON, but that’s it and I am forced to write about this release quite unprepared and impartial, because VOID do not sound like MARILYN MANSON. They were formed in 1999 and released three demos since then, which lead to a contract with Nocturnal Art in 2002. Their sound can be described as a blend of emotional and raw screams that are almost close to intense Black Metal with electronic elements and strange Metal riffs. The eight quite long songs are tied together by a constant bizarre, misanthropic, dark and twisted atmosphere fans of cold industrial music should find very appealing! I don’t know if anyone knows the movies “Dark City” and “Strange Days”, if you do than you have a good idea of what VOID is about, because “Posthuman” would have been an excellent alternative soundtrack for those celluloid opuses. Check them out, if you are interested in the musical representation of blackened industrialised sickness. If you like to get more information about VOID surf to: www.nocturnalart.com