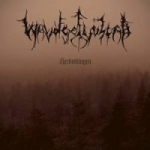 To capture the essence of mother nature and combine it with the rough Black Metal cult is a basic idea since at least 15 years – but only a handful of bands really achieved their aim. Without a doubt ULVER or EMPYRIUM are bands which should not be introduced to any real Black Metal fan.The Austrian band WALDGEFLÜSTER is also heading into the same direction. The solo project of Winterherz – with some assistance during the recoding sessions and for possible live battles – recorded his first demo "Stimmen Im Wald" in 2006 and Black Blood Records just released the official debut "Herbstklagen". But there is a major difference between the above mentioned bands and WALDGEFLÜSTER – whereas ULVER has tried to run down invisible borders (a development which is still not finalized) and enter new territory is this release a tribute to Winterherz own Black Metal roots. So you can find some nice acoustic intros or passages but the ‘soul’ of the release is traditional mid-tempo Black Metal with German lyrics. Can’t say that I’m deeply disappointed because the album is a good played and solid release but I fear that the late 90s offered so many ‘identical’ releases from bands like RIGER, GORBALROG; MENHIR, ANDRAS or SUIDAKRA that only the new Metal generation can find something really essential in this release. www.black-blood-records.de, www.waldgefluester-blackmetal.de.vu