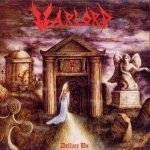 WARLORD
Deliver Us
(Sons Of A Dream Music LLC)
33:58min

Here’s the old EP "Deliver Us" from the legendary LA Metal act WARLORD – newly remastered from the original tapes(s), and reissued on CD by Sons Of A Dream Music LLC, which supposedly is the band’s own label, as we should believe. The songs on the "Deliver Us" EP were originally recorded in 1982, and those of you who have heard the original 6-song EP, can obviously imagine that it wasn’t always THAT easy back then to get out the kind of product that would please everyone after a couple of years – not to talk about some 30+ years or so. Anyways, this remastered version of the "Deliver Us" EP contains also a song called ‘Mrs Victoria’, which originally appeared on the "Metal Massacre III" compilation album in 1983. The mastering of these songs has been done digitally by Dr. Makis Tselentis at Studio R-Mic in Athens, Greece in 2012 – and the final master was produced by both William J Tsamis and Mark Zonder from WARLORD. I unfortunately don’t have the original EP available so that I could make a fair comparison sound wise, so I really cannot say much about all those things regarding the mastering of this final product of "Deliver Us". But undoubtedly all instruments have gotten an equal treatment in 2012 so that all instruments could be in balance compared to each other. The bass sound especially, is very audible at times on this new version of "Deliver Us", which I like a lot – and which certainly gives a good injection of power for the songs on this release. When talking about single stand-out tracks, how can one avoid liking a hypnotically moving ‘Black Mass’; one of the most ingeniously composed WARLORD songs ever in my opinion, or resist such a song like ‘Lucifer’s Hammer’, in which endlessly repeated guitar and bass rolls build up such a sticky vibe for the song that it doesn’t let you go but on the contrary kind of makes sure you’ll return back to this song and / or disc all over again. Plus, revisiting "Deliver Us" every once in a while is always nice to do, making you realize that some truly great sounding and in many ways classic Heavy Metal was done over 30+ years ago. According to everything what was said previously, if you don’t have WARLORD’s "Deliver Us" EP yet, now it would be an ideal time to grab a copy of this. This is a pretty essential WARLORD release nonetheless if you have just ever liked this legendary US Metal act. More info at: www.facebook.com/officialwarlord, label: www.facebook.com/sonsofadreammusic