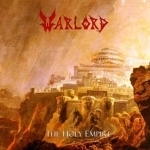 It was 1984, and this young Finnish guy far up in the north – constantly getting hungrier and hungrier for discovering new Heavy Metal music, ended up picking up an album titled "And The Cannons Of Destruction Have Begun…" by this band called WARLORD from Los Angeles, California, USA. This young, somewhat rebellious teenager was pretty much blown away by the band’s dark-flavored, epic sounding Heavy Metal back then. Never I had heard a band like WARLORD back then, with THIS exceptionally unique, yet so totally intriguing sound. "And The Cannons Of Destruction Have Begun…" was left on my turntable for days since I first placed it onto it. Time tends to fly – and it’s 2013 and I am holding a new WARLORD album in my anxious hands. It’s been 11 years since the last WARLORD release, "Rising Out Of The Ashes", which featured Joacim Cans (HAMMERFALL, CANS) on vocals and contained of a couple of new WARLORD songs while the rest of the material was re-recordings of both LORD GUARDIAN and old WARLORD songs (it was a good WARLORD release nonetheless). So, technically speaking, "The Holy Empire" could be counted as that 2nd REAL WARLORD studio album if it’s ALL new material that counts to make a full-length release. Without giving much of history lessons to anyone about WARLORD (there’s always the internet, y’know), it sincerely needs to be said that on "The Holy Empire" WARLORD have done a grande return back to the Heavy Metal scene (and please put ‘GRANDE’ with bold letters if you want to). This stuff herein is truest, boldest and most epic Heavy Metal to the deepest core of bone! As much as I can appreciate such names as MANILLA ROAD, CIRITH UNGOL, BROCAS HELM, LEGEND, PAGAN ALTAR and a few others that also strongly flag for the true epic Heavy Metal, it still has always been WARLORD for me personally that cuts the biggest slice out of the whole Epic / True Metal cake. WARLORD’s majestic, all horizons-expanding, somehow mysterious – and simply very addictive and capturing Heavy Metal has something special to it that locks minds out of this real world whenever spinning the band’s releases. "The Holy Empire" doesn’t offer any exception to this rule either; it does just that, locking my mind deeply into it – and whether it’s even necessary to compare this record to the band’s classic debut, it becomes quite irrelevant in the end of the day because both albums hold so much some classic WARLORD elements that it does become pointless to start making any comparisons in between these two releases really. "The Holy Empire", is an amazingly carefully crafted record from start to finish, leaving no option for any weak moments, and securely serving all WARLORD fans again by some beautiful, breath-taking and pompous epic Heavy Metal compositions that make you to give this record some nonstop spinning, day and night. Hail WARLORD! May your stay last ’til the end of times this time… WARLORD: www.warlord-official.com, label: www.facebook.com/sonsofadreammusic

WARLORD - Deliver Us - by Luxi Lahtinen