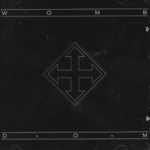 Shortly after Craig Pillard, Ronny Deo and Jim Roe left INCANTATION they formed WOMB and recorded a five track demo which has never been released until now because of the disbandment of this new project. WOMB was a Doom / Death band with deep vocals, two basses and no guitars. So you could imagine that they sound very, very heavy. But in my humble opinion they also sound quite boring. The songs are too monotonous for me. Because of the two basses WOMB also sound a little bit noisy. I think a guitar is necessary for a Metal band, isn’t it? Later Mike Boyce was added to the WOMB line up, Craig changed to guitar and the band was now called DISCIPLES OF MOCKERY. But they didn’t just change the name, DISCIPLES OF MOCKERY was a different band. Here they delivered finest Death Metal in the vein of INCANTATION. That means they play raw fast and blasphemous Death Metal with very deep vocals and some really doomy slow parts. Indeed DISCIPLES OF MOCKERY sound very much like INCANTATION on their debut album "Onward To Golgatha". The three songs on this CD were originally released as a live in the studio demo MCD in 1998 which was sold out very soon. After the debut album "Prelude To Apocalypse" DISCIPLES OF MOCKERY split up in October 2000. So this split CD is the farewell release. Though I’m not into the WOMB stuff I would call this a cool release. www.necroharmonic.com

DISCIPLES OF MOCKERY - by Hacker