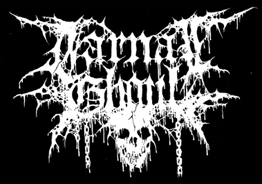 One of the greatest surprises in 2013 was a 7" that seemed to come out of nowhere. CARNAL GHOUL was the band, "The Grotesque Vault" was that EP. But was it really "nowhere"? Of course not! The driving forces behind this band are well known. Tormentor from DESASTER, among others, and Daniel "Mett-God" Jakobi, active in MILKING THE GOATMACHINE, started CARNAL GHOUL in 2013 and instead of releasing a demo, they started straight away with the release of an EP. And "The Grotesque Vault" is fine enough to ask the new hopefuls a few questions. Easier said than done: emails going nowhere, a removal and general business were the reasons for some delays. But Rome wasn’t built in a day either, so finally Tormentor fed our curiosity. Enough of the preface, let the GHOUL do the talking!


Cheers, Tormentor! I hope all is well with you?
"Hey Sir! Yeah, all fine here in Koblenz. Some busy times with my bands, but all looks great! Just released a 7" with LUNAR ECLIPSE. It’s Infernal (guitar player in DESASTER- Thomas) and me with some friends, using riffs which are too soft for DESASTER. Kind of Heavy Metal with a rockin’ voice : -), my first ASPHYX shows are coming slowly and DESASTER is releasing a 25th anniversary DVD soon. But anyway, let’s start with CARNAL GHOUL."

Let’s talk about CARNAL GHOUL. How did it all start?
"Oh, it was kind of a "drunken" idea from Daniel "Wumbo MettGott" Jakobi and myself. We met very often on festivals and felt like having the same feelings about Swedish Death Metal. Talked a lot and so the idea of CARNAL GHOUL was born. But it took like 2 years before we started writing songs. He is also very busy with some elks äähh goats like myself with my bands. But finally we made it."

When you started, was it supposed to be "only" a project, or did you have the intention to do CARNAL GHOUL as a full-time band?
"CARNAL GHOUL is and will be a good mix of both. But it’s more a true band than a project. CARNAL GHOUL is deepest underground and I really enjoy playing with Daniel and the boyz. It’s a good feeling in the band even the Hessian guys are really DUMB!" (laughs)

Did you start with the intention to play old school Metal of Death, the way the Scandinavians played it in the early 90s? Or did this happen by chance?
"No, not by chance. It was our deepest wish to release a real Swedish Death Metal album. We love these deep tuned, shredding guitars. Daniel and myself have the same faves like CARNAGE, UNLEASHED, EDGE OF SANITY, ENTOMBED, DISMEMBER, GRAVE but also stuff like BOLT THROWER, BENEDICTION etc are very important for our sound. I really enjoy the new Death Metal scene at the moment, many great bands from all over the world. And also Germany is big in business with bands like DESERTED FEAR, REVEL IN FLESH, GRAVEYARD GHOUL, ARROGANZ, DEATHRONATION etc." 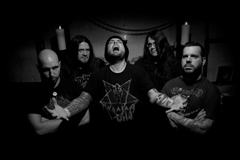 A little provocative question: why do you think the world needs another band of this style? Or don’t you give a fuck about this question?
"Fuck you! Haha. No, just kidding. I understand your question, but I do all my music in the first row for myself. I don’t want to force someone. I love to make some noise with my friends and if someone wants to release it, why not?!"

When I look at the CARNAL GHOUL Facebook page, you seem to be pretty active, playing shows etc. How about your other bands? DESASTER really don’t seem to be just a hobby, and MILKING THE GOATMACHINE do also have a good standing by now. You’re also playing with ASPHYX and other bands. How does it work to combine all these bands and differing time tables?
"DESASTER is a hobby, like all my bands. I have my normal life with normal boring work. Most of my free time is for my bands or my girlfriend. And I have some more bands I am involved. Daniel and Ferli are busy with MILKING THE GOATMACHINE, but they handle all that stuff also very easy. We are not in the situation that we must live from our music, so all is more relaxed and easy. Our new singer (Sven Gross – Thomas) is from FLESHCRAWL, so there is another band now we have to take care of! Haha!"

By the way, talking about you being part of ASPHYX now: are you a full member of the band, or do you just fill in for Bob Bagchus?
"I am their new live drummer for now. Had to learn like 20 songs so far. Bob will still taking care of doing the studio drums, but he can’t handle playing so much live and being so often away from his family. I was kind of shocked, when Martin van Drunen asked me the first time, because I am an ASPHYX fan and I want to see my idols on stage and me in front banging my head. But of course it’s a pleasure sitting behind the drums now." (well, recent happenings already outdated this answer. A few days after the interview was done, ASPHYX announced on their Facebook page that Tormentor is now a full member of the band, replacing Bob Bagchus for the reasons already mentioned above. – Thomas) 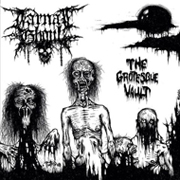 How does the distance between your hometown Koblenz and Daniel’s hometown Marburg influence the band rehearsals?
"It’s not that far. It’s like an hour drive, but we didn’t rehearse so much. Maybe twice a month. But it will become more before the recordings."

You’re around as a band not even for a year now and already have a quite good standing. What do you think are the reasons for that?
"Good question. But an important role is of course that Daniel and I play in 2 well known bands, have many contacts and been in the scene for MANY years. But I also think that our 7" isn’t that bad, hahaha. Me and Daniel have many contacts because of our bands, as you may know, Daniel also was the main guy in LAY DOWN ROTTEN before he quit!"

Since the recording of the EP, CARNAL GHOUL grew to a full band. Are Ritsch, Fernando and Johannes full members by now?
"Ritsch quit the band after our show in Dresden at mighty Skullcrusher eV. We have now, as I told you before, Sven from FLESHCRAWL as singer in the magic circle. So its Fernando (also in MILKING THE GOATMACHINE – Thomas) and Daniel, guitars, Sven vokills, Johannes (formerly in LAY DOWN ROTTEN – Thomas), bass and me on drums."

Let us clear a confusing point… Your Facebook page says, Fernando plays the guitar, but on the 7" he’s listed as the live vocalist… Please, brighten up our minds…
"All has changed after the 7", CARNAL GHOUL sometimes is a disaster, but in a good way… Haha!"

What can one expect from a CARNAL GHOUL show? Blood, guts and beer? ; -)
"Sweat, deep-grinding guitars, holterdipolter drums and beer’n’booze. We aren’t that bad in getting drunk. ; -)" 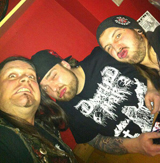 Do you have enough songs for a full concert by now, or do you need the "help" of one or another cover song?
"At the moment we are writing new songs, all previous shows we had 2 covers from EDGE OF SANITY and ENTOMBED. Maybe, if we have all songs ready, we’ll keep on covering in the set."

"The Grotesque Vault" was released by three different labels, one for each format. Will the future bring any concentration of forces through only one record company? Or will you continue doing it the underground way?
"We’ll release our full length via High Roller Records. He will do the vinyl and CD. Maybe we’ll do a tape version again. Time will tell. We are happy and thankful that Remission had the "balls" to release our debut on CD. We also have to thank High Roller, Mutilation Records and Coffin Filth for their cooperation."

Did any "bigger" labels already contact you for a new record?
"We don’t give a fuck. We are happy that Steffen will have his first real Death Metal release on High Roller from CARNAL GHOUL. I think he must open other ways of promotion, because he is normally more into typical Heavy Metal, NWOBHM, but DESASTER is on that label and also some great bands like NOCTURNAL, WITCHBURNER etc. He is just a great guy with a perfect attitude, a good mixture of underground feeling and professionalism."

Who is this mysterious "T-Low", who did the recording, mixing, mastering and the layout of the EP? Is it just another pseudonym of Tormentor? ; -)
"Haha, his real name is Thilo, so T-Low : -) He is the man behind Desert Inn Studios in Sinn / Edingen. He really did a great job and we’ll record the next stuff there as well. He did many good records from bands like MILKING THE GOAT MACHINE, LAY DOWN ROTTEN, MIISEO and so on."

What can we expect from the new songs?
"Pure fuckin’ dirty, filthy German Swedish Death Metal without compromise. Did you expect any other answer?"

There’s just one final question left: what will happen in the next months in the home of the GHOUL? Any plans? A full album, more shows, world domination?
"We’ll be on some festivals to death you down. More small shows will be confirmed soon. New album will hopefully be released in summer. World Domination? No, we hate humans! : -) New merchandise will be available soon as well. Cheers ‘n’ beers!"