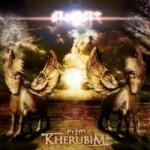 French label Antiq Records sent in a copy of the latest album by the French Brutal Death / Doom Metal band Ě titled “Kherubim”. The band incorporates some Middle Eastern style instruments to give it a MELECHESH / NILE type of vibe and the album has a total of 12 tracks running just over an hour. Let me start by saving you all 64+ minutes and tell you that this album was poor quality overall. The Middle Eastern instruments they incorporate sound good in some parts of the songs but in other parts they just do not mesh well with the instruments and just plain do not fit the song. Poor song writing, crappy production, and the vocals at times sounded very laughable. Nonetheless I proceeded to give the rest of the album a chance because let’s face it not all the songs on any album will be awesome. Track 3 ‘Denen Die Shamash Wachen’ has catchy guitar riffs and starts off on the right note. Slow to mid-paced tempo to keep the format listenable, the chorus fits the song well and kept my attention for the most part. Track 4 ‘Blessers’ continued where track 3 left off but kicked it into high gear and sped up the tempo but begins to drag out around the 4 minute mark. Tracks 5-6 must have been one long song at one point then split into 2. The same riff with the only difference being the poorer production level on track 6. While the tracks were not bad, they just dragged out to the point of being boring. I laughed when I heard track 7 ‘Dreams Of Sammuramat’, the guy sounds like he is learning a new language and is repeating the phrases he just learned while taking a piss. Track 8 ‘Of The Wretched Nature Of Lamasus And Shedus’ makes a decent recovery from the debacle that was track 7, but tends to have a very unnecessary chorus towards the end of the track. Track 9 is yet another laughable song with what sounds to be Adam Sandler’s Billy Madison character doing vocals. Tracks 10 and 12 were a snorefest for me, repetitive and stale. Track 11 is an ok track overall. The band has the right ideas but just needs to work on songwriting, better production, and focus on the endgame of making a good album. On a scale of 1-10 this album would be a solid 4. For more info: http://antiqlabel.yolasite.com, www.facebook.com/pages/Ê/217232001632739