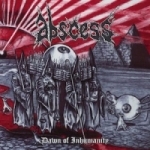 Incoming message from hell! ABSCESS are back and only the one of purest Metal blood will survive this hour of American Death Metal massacre. Three long years have passed since the release of their former album “Horrorhammer” and the DARKTHRONE “fan” label Tyrant Syndicate is happy to announce their next strike. The ABSCESS band members can be connected to so many cult acts starting with DEATH up to AUTOPSY and they are still living their musical life based on the ten Metal commandments. So no trendy experiments, no pussy Metal vocals or genre untypical influences – just ugly, Punk induced Death Metal in its purest form. 16 years, 6 releases and countless EPs could bring no harm over this act and every hungry soul out there knows exactly what to expect from a further ABSCESS release. On “Dawn Of Inhumanity “the band has found a very good balance between the fast forward parts and their home territory means ultra traditional (slightly midtempo orientated) Death Metal. This album is breathing the old spirit starting with a very cool album cover – purest old school art in every way – up to the sound and the song title. Even if the young generation is hailing to different gods, these are the roots of all evil and preferably the perfect music for all VOICES FROM THE DARKSIDE readers! www.abscessfreaks.com, www.peaceville.com