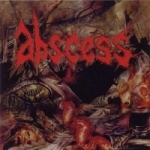 Mr. Chris Reifert and his sick psycho horde present their newest symphonies of sickness. This is already the third ABSCESS album, I can’t believe that the legend AUTOPSY is dead for that fucking long time. AUTOPSY is still one of my fave bands and without any doubt it’s one of the most influential Death Metal bands ever. I was never really into the ABSCESS stuff. Though similar style and concept I had to complain that ABSCESS was too noisy (there were a lot of those distorted bass parts, which are quite popular among Crustcore bands) and too much punk influences for me. That doesn’t mean that I disliked this band in the past but it was just one band among hundreds of bands, you know what I mean! “Tormented” is their first album for French Listenable records and for me it’s the best ABSCESS album so far. Of course it’s not on the AUTOPSY level but it’s a good album. I would describe the new songs as mixture of old AUTOPSY stuff and catchy punk structures. The songs ‘Halo Of Disease’ and ‘Ratbag’ sound like AUTOPSY playing a Punk song and ‘Deathscape In Flames’ and ‘Death Runs Red’ could be AUTOPSY compositions. “Tormented” is more ‘easy listening’ than, for example, the ABSCESS debut “Urine Junkies”. The production is cool and sounds very clear and powerful. So this sick piece of Metal is highly recommendable. By the way, the fantastic cover artwork was done by artist Mirian Kim who’s also created the artwork for several INCANTATION releases.