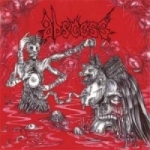 It’s unbelievable how many songs these sickos have written and recorded already since they put out their self-titled debut demo way back in 1994… According to the impressive discography that is printed on the backside of the booklet for “Thirst For Blood, Hunger For Flesh”, this compilation of rare songs is already the 15th (!!!) ABSCESS output (incl. demos, EPs, albums etc.). Holy shit! But anyway, even though ABSCESS is pretty much the AUTOPSY guys with a different bandname, I (luckily) never really was a die hard fan of what they spit out since their name change… While AUTOPSY always was a cool and totally underrated fuckin’ raw Death Metal act, ABSCESS continued on in a way more disgusting and even less accessible direction (musically as well as lyrically). Kinda like the next logical step from what AUTOPSY already started on “Shitfun”, yet more sick. The 25 tracks on this CD here have been compiled from various different sources and therefore pretty much differ in quality (mainly soundwise). In case you already have a quite big ABSCESS collection, let me tell you some more details about the material, so that you can decide on your own whether it’s worthy for you to buy this disc here as well or not. What I really appreciate is the fact that ‘Necroslut’ (originally on the second ABSCESS demo “Raw, Sick & Brutal Noize”) finally ended up on CD as well… For some strange reason it was missing on their demo collection CD “Urine Junkies”, so now you have ’em all. Additionally there’s 3 tracks from the “Filthy Fuckin Freaks” live tape, 7 tracks from the “Throbbing Black Werebeast” EP, 4 tracks from the “Open Wound” demo, 3 tracks from the split-10″ with DERANGED as well as 5 previously unreleased tunes. ‘Suicide Pact’ is a leftover tune from “Through The Cracks Of Death”, while ‘Beneath The Skin’, ‘Doomsday Inside My Head’, ‘Maldoror’ and ‘Thirst For Blood, Hunger For Flesh’ are from an unreleased 2002 studio session. A cool coverart (courtesy of Dennis Dread) as well as an impressive booklet with lyrics and liner notes complete the picture. So, if you already worshipped the regular ABSCESS releases and simply can’t get enough of them, this is certainly a worthy purchase. Label contact: www.necroharmonic.com