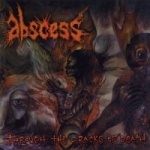 ABSCESS
Through The Cracks Of Death
(Peaceville Records)
43:43min

I admit without reluctance that I am not a fan of the sick and weird “humor” of the last two AUTOPSY efforts, and the title of the first ABCESS (the new incarnation of AUTOPSY) full length didn’t make it attractive to me either, so I didn’t bother to listen to it. Did I make a mistake? I think not, because what can you hope going from “Shitfun” to “Urine Junkies”? Yeah, you’re right. Add to this that AUTOPSY began to seriously neglect the musical quality after releasing “Mental Funeral”, this one a minor classic really, to favor a somewhat rushed writing of short and uninspired songs. Fortunately, this sophomore album by AUTOP.. oops, sorry, ABCESS comes out as a rather pleasant surprise! Chris Reifert and his partners in crime (Danny Coralles and Clint “XX” Bower) deliver an insane and dirty form of Heavy Death Doom. Immense strangeness and perverse malignancy passes across this album like plague did across Europe in 1348. Here ABCESS rekindle with the grandeur of the “Mental Funeral” album, mixing very fast parts with slow and splashing rhythms. The result is an album enjoyable from the beginning to the end, with no fillers in sight. The lead work of the Coralles / Bower pair is impressing to say the least, no the awful dissonant stuff to be on offer in 99% of the Death Metal releases, each solo is well constructed and dare I say, melodic (to a limited extent of course) for such a brutal release. ABCESS deliver pure Death Metal and recapture the ancient spirit of the genre, when you could feel exquisite fright listening to the early classics (and yes, no blast beats on offer here, only very fast drumming for a change!). And it is obvious (at least to me) that the ABCESS dudes are Doom Metal fanatics, because lot of traces of this music could be found on “Through The Cracks Of Death”, especially on the title track and on ‘Serpent Of Dementia’ (the latter could have been a CATHEDRAL title, don’t you think?). This album is work of maturity, the songs are interestingly composed and top an average of almost five minutes long giving the musicians enough time to display their ideas. And it is a pleasure to hear the sick vocals and immediately recognizable drumming licks of Mr. Reifert again! My favorite on this album is not even a song but the little outro “Vulnavia” because it brings back to my mind the superbly attractive assistant of the good Dr Phibes! Well, enough of my babbling, I am sure you have understood already that this new ABSCESS offering is an essential purchase. This is real music for real people!